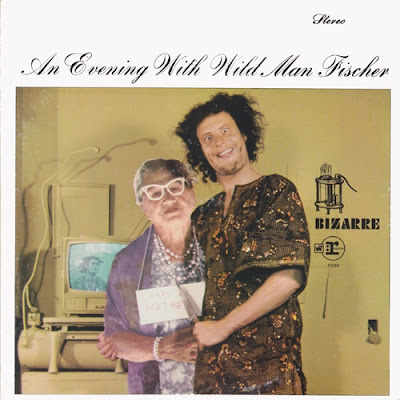 
Much sought after by an ever-increasing body of dedicated fans, this is the famous first album by an unforgettably unique and tragically misunderstood vocalist. Recorded and released in 1968, this album tells as much about the producer -- Frank Zappa -- as it does about the singer himself. Cal Schenkel's cover art ties it in with Zappa's own releases from that period. Considering the fact that Fischer appeared with the Mothers of Invention on several occasions, it is a shame that only two selections allow listeners to savor the interesting combination of Zappa's guitar and Wild Man's total-release vocalizing. "The Taster" sounds a bit like Paul Anka's "My Home Town," while a very psychedelic tantrum called "The Circle" has Zappa's best lysergic fuzz guitar up in front alongside the screams of the Wild Man. When he sings his theme song "Merry-Go-Round," Fischer is accompanied by the Bizarre Percussion Ensemble. Their expertly executed clunks and clangs and rattles and squeaks were also layered over live location recordings of Wild Man Fischer on the Sunset Strip in Hollywood, as he sang songs for loose change in front of the Whisky A Go Go and the Hamburger Hamlet. There is also a humorous poetry performance ("The Madness and Ecstasy") by Kim Fowley and Rodney Bingenheimer, who rant about the historical and social importance of Wild Man Fischer. But the real gold in this album is an extended series of unaccompanied short songs. These are masterpieces of private whimsy. "I'm Working for the Federal Bureau of Narcotics" ends with a wonderful emotional outburst, as Fischer runs around the room screaming "stay away from me!" His surrealistic magnum opus, "The Leaves Are Falling," sounds almost like "Papa Oo Mow Mow," but employs a strange noise that Fischer seems to have made by clucking his tongue against his upper palette. Other highlights include "Think of Me When Your Clothes Are Off" and "Jennifer Jones," an outrageously funny epic tale of competitive serial killing. Fischer periodically describes his own life, what it was like to be different, how he thought up original songs and tried to share them with the world. Especially powerful is "The Wild Man Fischer Story," whereby the singer carefully reenacts his adolescence, describing how his mother actually had him committed to a mental institution twice for singing in his room. It is a mean story, a succession of misunderstandings that set the stage for a lifetime of being misdiagnosed, misrepresented, and misunderstood. Fischer quarreled with Zappa, frightened the Zappa family, and plunged this amazing record into limbo, as none of the surviving Zappas want anything to do with him. Negotiations are underway, and true Fischer devotees are wistfully waiting for the day when his first album will make its first legitimate appearance on compact disc.
Posted by Zen Archer at 9:23:00 PM