The Mothers Of Invention - 1969 - Mothermania

The Mothers Of Invention
1969
Mothermania 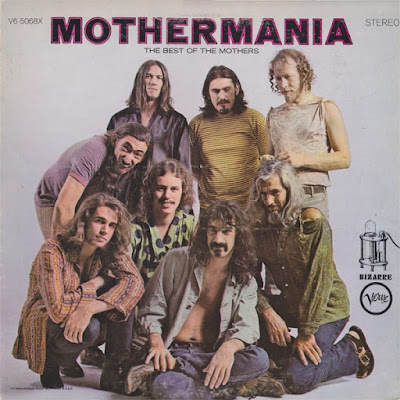 
Mothermania is a best of album from Frank Zappa & the Mothers of Invention. It´s not a regular best of album though as most of the songs differ a bit from the original. This is a real treat of course and IMO the reason for buying Mothermania if you´re already a fan who has all the albums ( of course you have all the albums right ?).
There is a broad selection of songs from the three Mothers of Invention albums Freak Out!, Absolutely Free and We´re Only in It for the Money. Neither Cruising with Ruben and the Jets or Uncle Meat is represented here. The first one probably because it wasn´t very popular and with Uncle Meat I´m not sure if it was released before or after Mothermania came out. Uncle Meat was released the same year ( 1969) as Mothermania.

The song selection is good and represents the three albums well which means that the album serves its purpose as a best of album well. The small changes to vocal parts or instrumentation is only something you notice if you´re a hardcore fan. There are great songs like Brown Shoes Don't Make It, Mother People ( with the changed vocal line: Shut your [%*!#]ing mouth about the length of my hair), The Duke Of Prunes, The Idiot Bastard Son, Plastic People, Hungry Freaks, Daddy and Who Are The Brain Police? On Mothermania, but all songs are classics in The Mothers of Invention´s repetoire.

The musicianship is of course of the highest caliber as always when Frank Zappa is involved. Some might call some of the vocals parts out of tune but believe me when I say that it is on purpose when things sound a bit dissonant or out of tune at times.

The production is muddy at times but incredible anyway if you think about when this music was made. Frank Zappa is a genious producer. There I said it.

Mothermania has a double function as it is equally as attractive to the Zappa newbie as it is to hardcore Zappa fan. It´s a very recommendable best of album


UNIQUE VERSIONS ON MOTHERMANIA (RELATION TO FREAK OUT!, WE'RE ONLY IN IT FOR THE MONEY AND ABSOLUTELY FREE)

Mothermania was an old compilation that Zappa himself put together. Some tracks were a bit different than the original versions: in fact, all Freak Out! tracks are alternate stereo mixes, all We're Only In It for the Money tracks are alternate mono mixes, and all Absolutely Free tracks are the original Absolutely Free mixes (but "Call Any Vegetable" has been shortened). And here are the exact differences, vinyl side by vinyl side, track by track, according to JWB, Román García Albertos, Biffy the Elephant Shrew and Michael Gula:

Side 1:
Brown Shoes Don't Make It - no difference.
Mother People - alternate mono mix: Complete song from beginning to end. No sound effects edited in, the line "Shut your fuckin' mouth about the length of my hair" line is NOT censored, and the song ends after "holding you near me" - no vinyl record scratch, just a natural fade-out
The Duke of Prunes - no differences. But the subtitles that appear on Absolutely Free are not used on Mothermania; the title "The Duke of Prunes" covers the whole suite, with "Amnesia Vivace" and "The Duke Regains His Chops, which are included here.)
Call Any Vegetable - the "improvised section" is edited out: it jumps right from the Holst quote at the beginning of "Invocation & Ritual Dance of the Young Pumpkin" into "Soft-Sell Conclusions", skipping the whole sax/guitar solo part. (Note that these subtitles that appear on Absolutely Free are not used on Mothermania; the title "Call Any Vegetable" covers the whole suite.)
The Idiot Bastard Son - alternate mono mix: Complete song. full blown intro not on We're Only In It for the Money (piano & timpani - very nice), no "I never wanted to ..." section edited in, no snorks, and the end fades out naturally. Also, Frank made the acoustic guitars and clarinets more relevant in this mix. (The LP is worth getting just for this track alone.)

I listened to both my vinyl Absolutely Free and the CD, and they sounded the same on "America Drinks & Goes Home" ... perhaps the fact that the vinyl is more compressed near the end of the side was confusing the other listener? (it sounds like the vocal is more centered, but I think that's due to compression).  The Mothermania mix of "Who Are the Brain Police?" is an interesting one. If you listen closely to the second bass note in the intro, you can hear what sounds like an organ. The fuzz guitar in the intro is a bit fuzzier, and the kazoo at the end has more of a "quacking duck" quality to it. There is a "space echo" applied to the words "home", "chrome", "off", "soft", "knew", and "too". The piano is a bit more prominent as well. Also, it sounds like there are more than one voice singing the "What would you do if the people you knew" verse.

There may have been two variant covers. It appeared with both black and blue Verve labels. The UK pressings did not contain the Bizarre inner sleeves or the booklet, although this was included with some European issues (below).

On Mother's Day, 2009, the ZFT finally re-released Mothermania in MP3 and FLAC (YAAAY!) formats, bringing it back into "conceptual print." This version is mastered by Bob Ludwig and sounds quite good. All of the exclusive tracks are accounted for; before 2012, this was the only place to find the original "Absolutely Free" tracks sans reverb (albeit with "Call Any Vegetable" edited). The intro to "Plastic People" does not have the glitch found on the 2012 Absoultely Free CD.
2012 UMe CD

A physical release of the 2009 digital remaster: after more than forty years, Mothermania is back in print!

Email ThisBlogThis!Share to TwitterShare to FacebookShare to Pinterest
Labels: Frank Zappa, The Mothers Of Invention, USA