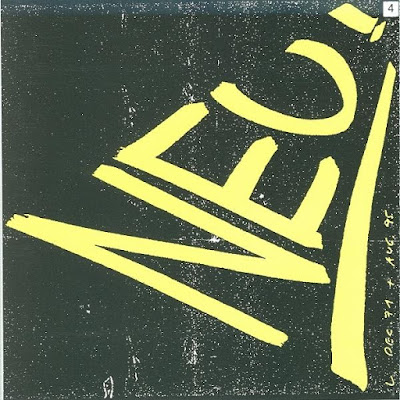 The mid '80s Neu! reunion album wasn't really much of an album. But it wasn't much of a reunion, either. The aborted studio sessions apparently yielded only one melody, replicated by the duo in assorted variations on a theme: "Nice Wave"; "Wave Naturelle"; "Quick Wave Machinelle", and so forth. More than a decade later the ersatz 'album' was released by Klaus Dinger, heavily amended and without the participation of his partner Michael Rother, who refused to endorse it.
Perhaps not surprisingly, the music strongly resembles a long-lost LA DÜSSELDORF album. And because it was recorded in the 1980s, you can expect to hear a lot of Fairlight synthesizers and digital programs, anathema to old-school Krautrockers with a chip on their counterculture shoulders, but entirely consistent with the mechanized style of the era.

At least the band (thankfully, some would say) wasn't revisiting the desperate experimental territory of their "Neu! 2" album, where two short pieces of music were repeatedly mangled beyond recognition over an entire side of vinyl. The new song, in all its permutations, is actually quite pretty, and employed more like a recurring motif, sometimes with a calming New Age aura ('Schöne Welle"), elsewhere with aggressive New Wave energy ("Crazy"). Rother himself had already followed a similar game plan on his 1979 solo album "Katzenmusik", but the changes here were more radical, even including a goose-stepping club mix in "Dänzing" (note the clever play on the name of the old Prussian capital: a nice bit of Klaus Dinger iconoclasm).

The album's biggest liability, besides its questionable legality, might have been the Neu! trademark itself, raising expectations that could never be met. It might have worked better as a Dinger solo project, since his own handprints on the music were more prominent than Rother's, from the satiric collage of "86 Commercial Trash" to the dreamlike renditions of "Deutschland Über Alles" that bookend the album. But of course it wouldn't have had the same market value.

Michael Rother would later compile his own 'official' (if somewhat redundant) mix of the same tapes (see: "Neu! '86"), in effect suppressing Dinger's original vision, now long out of print. What survives in either example is only a skeleton of what the finished product might have been, given more time and less creative friction. It certainly doesn't belong on the same shelf as the band's earlier iconic albums. But there's a lot here to enjoy, not least the teasing suggestion of how Neu! might have evolved in years to come.
Posted by Zen Archer at 4:41:00 PM