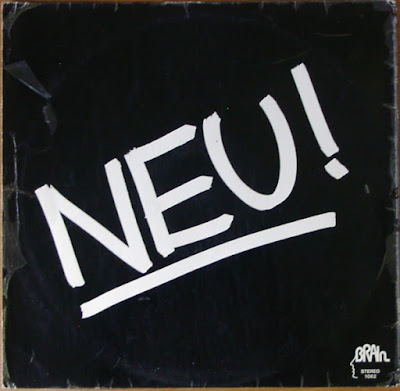 The last of three classic recordings by the legendary Krautrock team of Michael Rother and Klaus Dinger was actually a reunion (more accurately, a reconciliation) album, but unlike the desperate mess of their previous NEU! 2 this effort makes a virtue of its split personality.
It's still a schizophrenic affair: one half hippie sweetness and light, the other half proto- punk energy and aggression, and all it takes is one glance at the band portraits to see where the division falls (I'm assuming the original gatefold album sleeve art was reproduced for the long overdue "official" CD reissue). Rother was photographed in angelic soft focus, his ponytail carefully tied at his neck; Dinger is dressed all in black, sporting cool insectoid sunglasses (indoors) and clutching a cigarette.

The photos reflect their obvious stylistic differences, but the creative tension is, happily, all but invisible in the music. This is easily the most accessible album in the NEU! catalogue, the one most likely to appeal to listeners understandably nervous about exploring the more dangerous avenues of early '70s Krautrock. The first half of the album (Side One, for all you unreformed vinyl junkies) is especially easy on the ears, and points directly to the pristine beauty of Michael Rother's first few solo albums.

The opening three tracks actually work together almost like a 20-minute suite, beginning with the infectious motorik beat of "Isi", and continuing through the dreamy, majestic "See Land" to the narcoleptic nine minute sleepwalk of "Leb' Wohl". You'll notice how the energy level collapses from one song to the next, until by the end of "Leb' Wohl" the pace has slowed to an ambient metronome pulse of solo piano and distant surf, with Dinger muttering something in a semi-conscious whisper about lovemaking on a sandy hill.

After that the rest of the album is like a bracing slap in the face, presenting a barrage of over-amped guitars, pounding drums, and Dinger's patented adenoidal sneer (shouted more than sung). Want to know where Johnny Rotten learned his anti- establishment stage attitude? Listen to "Hero" and "After Eight".

Dinger added extra butt-kicking vigor to the rhythm section by enlisting two auxiliary drummers: brother Thomas, and Hans Lampe; all three would later join to form Dinger's next band, La Düsseldorf (a sort of NEU! lite, and highly recommended to fans of Post- Prog esoterica). The second half of "NEU! '75" is more or less a crude warm-up for the new group, with a similar mix of ringing guitars and non-stop 4/4 drumming, and the same assortment of weird tape noises, in this case sound samples from Side One, slowed down, reversed, and so forth. Not to worry: they're used only for atmospheric transitions, not as entire compositions (as in "NEU! 2").

Rother and Dinger would reunite (again) almost ten years later for one final round of the NEU! experiment, but I haven't yet found the heart to investigate any further. The group in its first, brief incarnation produced some unique and timeless music; why risk spoiling that legacy by listening to something from an entirely different musical climate that can't hope to match the original?
Posted by Zen Archer at 4:34:00 PM