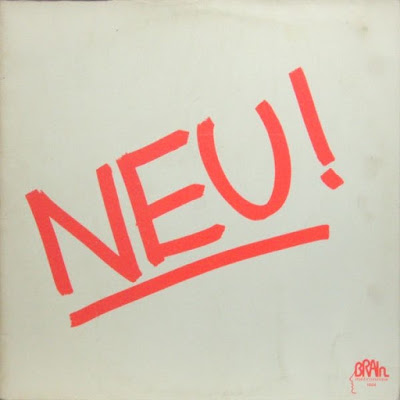 NEU! is a duo of Michael ROTHER (guitars, keyboards) and Klaus DINGER (bass, drums, vocals, guitar and piano). They jumped ship from KRAFTWERK at a very early juncture. The '70s electronic band NEU! created a new kind of rhythm that bridged the gap between rock n roll's syncopation and dance music's four-to-the-floor beats. NEU's music is simple, natural, creating evocative soundscapes that are stimulating rather than tranquilizing. Their melodies are balanced upon driving almost hypnotic beats. From big fans BOWIE and ENO back in the seventies to the hundreds of postrock/electronica acts that namecheck them now, NEU! are gods.

NEU! only made three studio albums during their brief existence in the 70s (another studio album was released in 1995, called "Neu! 4"), but they were uniformly excellent. It's possible that you could discern their "style" just by listening to this one (or any one of the others), but as with CAN, FAUST and KRAFTWERK, to really get the full experience you have to hear all of them. The debut is a fascinating work of experimental Krautrock. The critical status quo qualifies "Neu! 75" as the best of three albums, simply because it is the most musically adept and holds the most studio polish. The "Hallogallo" begins the first album, and is an essential slice not only of Krautrock, but of musical history. This hypnotic album is the most like KRAFTWERK, but the emphasis is on guitars, not keyboards. "Black Forest Gateau" is a British compilation drawing entirely on the first and last LPs.

Krautrock may not be every prog fan's favorite type of music, but there are few canons that demand as much dedication from the listener, and in the end, the trance can't work its magic unless you're there for the duration. I say Krautrock is great prog, and NEU! is as definitive a specimen as any.

Whenever I feel the need to offer a no-strings-attached five-star recommendation I invariably turn to Krautrock, and the debut album by Düsseldorf's best combo (sorry Ralf and Florian) is one of the brightest jewels in the Krautrock crown.
What is it about this band that makes me want to legally add an exclamation mark to the middle of my surname? It can hardly be the richness and complexity of the music, or the virtuoso chops of its two players. Just the opposite, as a matter of fact. The music of NEU! is simplicity itself, taking a rock 'n' roll template and stripping it down to its most basic components: a steady drum beat, played with more stamina than skill, and some of the grooviest one-chord guitar work ever committed to vinyl.

Klaus Dinger called it the motorik beat, and he plays it non-stop throughout the sensational 10-minute long album opener "Hallogallo", with Michael Rother's guitar (in at least four overdubbed tracks) drifting in and out of the mix. With its ridiculously uncomplicated rhythm (the 4/4 meter raised to the acme of linear perfection), the song is the perfect soundtrack for a late-night, long distance road trip, no arguments or exceptions allowed. Listening to it is almost like a glimpse of infinity: the long fade at either end makes me think the song is still playing in some distant parallel universe, and always has been since the creation of sound itself.

The rest of the disc is no less of a challenge, from the jackhammer intensity of "Negativland" (with real jackhammers, please note) to the evocative ambient explorations of "Im Glück" and "Lieber Honig". The latter presents the album's only vocal performance (I hesitate to call it singing), with Klaus Dinger's wordless, pre-adolescent improv sounding like an autistic nursery schooler going down for his afternoon nap, and was miked so closely you can hear every catch in his throat, every click of saliva, before the "song" fades back to the slow rowboat drones of "Im Glück".

The album was barely released outside of Germany at the time, but has since been name-checked as a major influence by some of the coolest bands at work today: Radiohead, Stereolab, Yo La Tengo (to name only a few). Not bad for a 3+ decades old recording that took all of four evenings to assemble.

You could argue (and I wouldn't disagree) that the music of NEU! bears little relation to genuine Progressive Rock. But the fact that they were, and remain, so far ahead of their time is enough reason to include the band in this forum. This album in particular sounds like it was recorded only yesterday, just like it did ten, fifteen, twenty years ago, and likely will a generation or more in the future.
Posted by Zen Archer at 4:23:00 PM