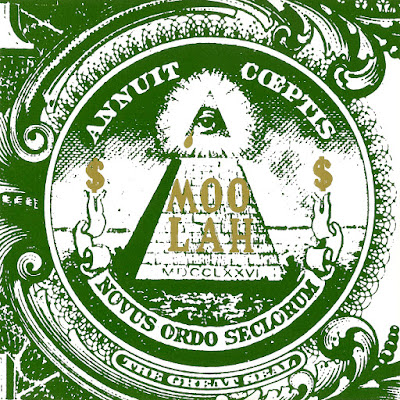 
This one appears on the 'Nurse With Wound ' list from 1980. It's avant garde electronic prog for want of a better description. Listening to it I have to say that it's a very strange and unusual album considering it was released in 1974.
Recorded by 'never to be heard of again' reprobates Walter Burns and Maurice Robertson, they utilize backwards phasing and other morphing gadgets to make this recording one of a kind. 'Woe Ye Demons Possessed' is nearly entirely instrumental and full of massive echo and re- verb throughout without a single guitar in sight.

The production and recording itself isn't that good if played at loud volume. The bizarre and erratic nature of the song structures are, however - excellent if somewhat directionless. Moolah are another of those obscure bands whom the likes of 'Throbbing Gristle' and in particular 'Zoviet France' owe a debt. In particular the latter who virtually stole entire piano sections for 'Cirice' for their excellent album 'Eostre' from '84.

Having owned and heard this numerous times since 2006 I have to admit that it's a bit hit and miss. The quieter messed up and atmospheric piano parts are excellent. They reveal an entirely original sound, unlike anything I've heard before. The drums have a bit of a tinny quality which detracts however. Although when everything starts playing in reverse on 'Mirrors' I have a grin on my face like a Cheshire Cat.

A very unAmerican recording, out of time and out of place considering it was an entirely USA affair.

Straight from the sub-subterranean collective basement patronized by all of the world’s greatest psychotic (ehh-hm visionary) artists comes another ultra obscure gem going by the name of Woe Ye Demon Possessed by the group(?)/or maybe it’s just a regular old dude with a rack of wacky effects, Moolah. Think about that name. Moolah. What comes to mind, friends? I personally conjure images of bone in the nose voodoo mamas twirling in some swamp drug ecstasy. Maybe that comes from my association of the word Moolah with that famous female wrestler The Fabulous Moolah; not that that matters. I’m just typing to type at this point. You know, taking up space to make this look more profound than it really is.
Alright, back to the topic at hand. Moolah – Woe Ye Demon Possessed. I know nothing about this LP. I don’t know its history, who made it, what city it was made in (it is from the good ole’ Stars and Stripes, but one could very easily assume Deutschland). This makes for some very compelling mystery. I do know that there is a great buzz among collectors of rare psych records. So, naturally, being the conformist that I am, I too decided to hop on that kaleidoscopic, day glo bandwagon with the rest of the damned. This was a good decision on my part because Woe Ye Demon Possessed is pretty frakin’ awesome and in dire need of a cd reissue.
Seeing as how there’s no prominent data on the recording (even on the almighty internet), I gathered as much as I could from the cover; it’s that famous evil eye over the American dollar with the Latin phrase. I don’t even know how to order a beer in classical Latin. So I’m not about to feign a bullshit translation. One might assume that this somehow relates to wacky conspiracy theories about the Freemasons/ Bilderberg Group ad barfum. I don’t subscribe to that. I would guess it’s an ode of sorts of to the race of aliens who helped guide the Egyptians in their constructive efforts, the eye symbolic of their observations and inevitable return to Mother Gaia. There’s also that superb title Woe Ye Demon Possessed: the man enlightened with the knowledge of his extra terrestrial guardians is the one who’s possessed. (Perhaps not alien beings, but the one who’s possessed with the omniscient powers of the psychotrope is possessed, etc.)
On to the music! The only proper appellative I could grant would be – “a lost field recording made by an ‘animistic’ alien enlightened tribal people who somehow had the ability to bend time.” That’s an incredibly pretentious way of putting it. In non wacko terms I can hear a strong Faust 1, Guru Guru and Ash Ra Tempel influence. Just add a twist of ultra lo fi and a sprinkle of Texas garage psych and you have something similar to the finished product. I’ve often suffered with many sleepless nights where I asked myself, “Damnit! When am I going to hear an American record with a distinct kosmische influence? When? Why God? Why?” Well, I think the Lord above answered my prayers and blessed with me this LP.
It starts off with a profound, deity invoking bang with “Crystal Waters”, a ritualistic piece that sounds as though it should be played on a ziggurat prior to a human sacrifice. If The Tempel was playing garages in the late 60’s, this would have been the product: Schulze synths on speed, heart beat drums, ancient keys. Great stuff. Follow that with a schizophrenic outburst/psycho-delic exorcism, “Terror Is Real”, and then a buried on the ocean floor fuzz hum bar room piano, “Courage”. You have one kick ass album side.
Side two is also profoundly sublime. Both “The Hard Hit” and “Mirror’s” follow the same unsettling bleeping buzz synth, chanting voices from another dimension pattern. It all builds up into crazy tension. I feel as though I’m at a séance of sorts. Plus, “The Hard Hit” features some weird kinda’ sorta’ motornik drums before they go off into the great beyond with those creepy voices. The last track “Redemption” brings back the piano and anachronistic radio fuzz. It calms everything down, leaves you staring off into space waiting for the redeemers themselves to finally land.
All in all, I found this to be a fabulous recording, a great shining diamond in the rough. Krautfreaks will agree too. I predict that this will eventually be reissued. Good things come to those who wait. Cult labels won’t be sleeping on this for much longer. Happy hunting. It’s well worth the chase, friends.
Posted by Zen Archer at 3:37:00 AM