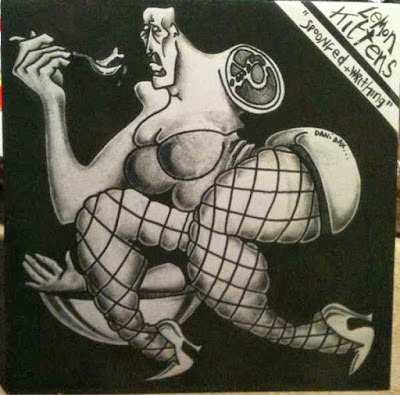 
Short lived experimental group formed by Karl Blake in his home town of Reading.  Karl asked Danielle to design the cover for an EP, Danielle joined, and pretty soon the group became a duo.  Signed by Nurse With Wound's John Fothergill, they became part of the United Dairies label's roster of eclectic and bizarre acts on the very outer fringes of the UK's alternative scene.  Splitting in 1982, Danielle became a successful indie solo act, although her bid to make the mainstream ultimately failed.  Karl ploughed ahead into more obscure realms with his group Shock Headed Peters, and occasionally playing as a member of Current 93 and Sol Invictus.

The Lemon Kittens come from a stranger place than most normal DIYer's, from the crustier edge of the pie, but none the less,part of the same pie. The link between the TV Personalities and Throbbing Gristle.
This is the first release from Karl Blake and Danielle Dax, and it is suitably nuts. Great off kilter pop tunes with the logic of dreams, sounds like a karaoke night in a lunatic asylum.

With no “proper” musical skills upon their formation in Reading, England, the Lemon Kittens epitomized the “anything goes” spirit of late-’70s post-punk in the U.K. Karl Blake, who cut his teeth in numerous outfits prior to the Lemon Kittens, started the band with Gary Thatcher and a revolving cast of others (which at one point included future Alternative TV leader Mark Perry), but at the time of the release of their first EP in 1979, the seven-song ‘Spoonfed + Writhing’ 7?, the group’s lineup featured Blake, Thatcher, N. Mercer, Mylmus, and Danielle Dax.
The group was whittled down to a duo of Blake and Dax by February of 1980; the other three members had fled, making for the group’s 16th different lineup change since initialization in April 1978. Blake and Dax then decided to operate primarily as a duo, with help coming from whoever whenever they needed the assistance to perform.