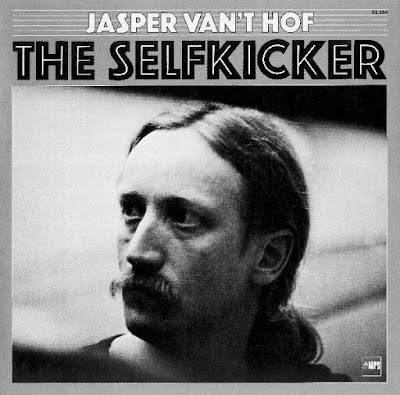 A2 was written and dedicated for the Ballet of Felix Blaska.

Born in 1947, Hollander Jasper van’t Hof is one of the best known jazz pianists and keyboardists in Europe. Van’t Hof first made a name for his work with guitarist Toto Blanke, and went on to form Porkpie with jazz greats Charlie Mariano, Jean-Franois Jenny Clark, and Aldo Romano. Jasper has recorded with such major names as Archie Shepp, Steve Swallow, and Steve Kühn. He is especially noted for his solo piano work and his highly successful world music group Pili Pili. With its Euro-African mix of jazz, rock, and pop, the group has been a mainstay on the World Music scene from its founding in 1985 through the present, and has been a stepping-stone for the careers of such African pop icons as Angélique Kidjo.

The Selfkicker reunites Jasper van’t Hof with his compatriot German guitarist Toto Blanke. The album demonstrates why they were considered two of the best fusion players on the international scene. The title piece integrates a strange rhythmic pattern with a rhythmically juxtaposed melodic motif, and the 3/4 Pas de Deux has a pensive theatrical quality, with van’t Hof alternating between the electronic effects and acoustic piano. Associations is another off-beat piece with Blanke’s needle-sharp lines piercing through the dark background; Jasper vocalizes the melody towards the end. Hang Out heralds a synth spectacle whereas there’s a bit of French romanticism at the beginning and end of The Night After the Day Before as well as a fantastic (synth? guitar?) solo. Refillable and Home Again unite van’t Hof and Blanke in dynamic duo (Jasper also plays drums here). Creative European jazz fusion at its peak by players who know how to do it right!