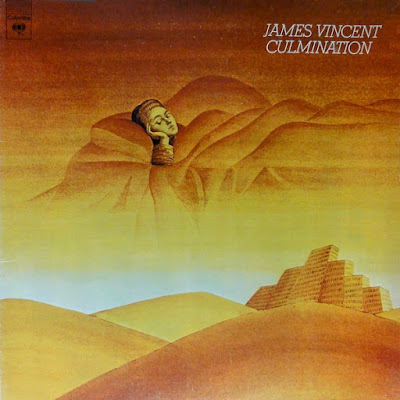 
James VINCENT is just one of many excellent musicians from Chicago area. As a guitarist he changed through a lot of styles, and through his career was not just a solo artist but a studio musician, writer and composer.

One of his first more known bands in blues ridden Chicago were THE EXCEPTIONS in which he worked with Pete CETERA who would become lead singer of CHICAGO. After working as a studio musician for many Chess Records recording artists, VINCENT became a guitarist for the proto-prog band H.P.LOVECRAFT. Then he met Howard WALES & Jerry GARCIA with whom he toured for a brief time. While touring and playing the blues/funk influenced fusion at the time, VINCENT became inspired with their opening band and their guitarist, which was John MCLAUGHLIN and MAHAVISHNU ORCHESTRA.

Afterwards he began recording and released four albums up to 1980 before taking a longer break with his solo career. His earlier records can be reminiscent of for example SANTANA with whom he used to work with and his RnB roots show in a lot of his work but amongst those there is fine energetic instrumental jazz fusion.


Recorded in the winter of 1971 but not released until 1974.  It is almost entirely instrumental,  featuring many renowned musicians of the day,   and it is appreciated by the more eclectic listeners of music.  To say that much of the music is experimental would be an understatement.   I almost fell over when a Washington Post music critic called it the "most creative album since Sergeant Pepper".  It has no musical similarities to the Beatles;  that is for sure.  Vinyl copies are going over the web for as much as $75 if you can find them.
Posted by Zen Archer at 7:46:00 PM