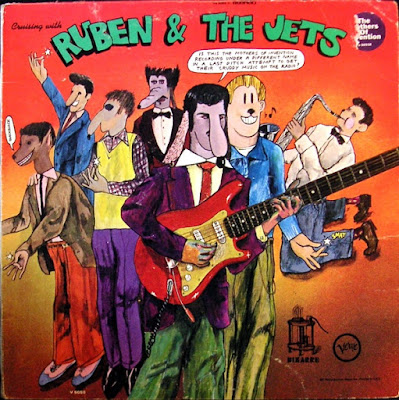 
Believe it or not, this is a concept album. Frank Zappa created the fictional band....the band consisted of a bunch of teenagers that an old man (Uncle Meat) turned into "dog snout" people under the lead of singer Ruben Sano. The album itself belongs to the "No Commercial Potential" project. The other albums that belong to that project are "We're Only in it For the Money", the revised version of "Lumpy Gravy" and "Uncle Meat". FZ said that the song order from these 4 albums could be cut apart with a razor blade and reassembled in any order and it would still make one piece of music that you could listen to and then cut them apart again and assemble them in another order and still listen to it.
This is Frank Zappa's funny yet loving tribute to the 50s style doo wop the he loved so much. Yes he loved it. This album has both new and re-vamped songs on it, all written in the doo-wop style. There is no prog here, but out of all the FZ doo-wop collections, this one is the best, so in a way it is essential if you want to understand and appreciate the artist. FZ always did what he wanted, even though most of the time, he wanted to be recognized for his serious jazz/classical music, and he used popular music to get more people to listen to his serious music.

On the surface, the music here sounds really simple. Apparently, it was a really easy album to record. However, FZ still adds some strange harmonies, some winks to one of his favorite composers, Igor Stravinski. There are some odd key changes throughout the album and even a few weird meter changes. That was FZ adding his touch so that listeners that were listening would know that it really was him. But for the most part, don't expect to find much other than doo wop music, somewhat enjoyable and entertaining for the most part. No guitar solos here except for on the last track, and it is kind of out of place, but still good. Some of the songs are better than others, but on the whole, it's a fun record and a novelty to own the vinyl.

Strangely enough, a 2nd and a third Ruben and the Jets album was recorded by an actual band by the same name. The first album name was "For Real" and it was produced by none other than Frank Zappa. Good luck finding that one.


What to Get: "Greasy Love Songs," available on zappa.com.
Summary: EXTREME differences between CD and vinyl versions. Zappa remixed and overdubbed it so much for the CD release that it's like a whole new album, from the '80s instead of the '60s. Defending the remix is extremely controversial. Thankfully, the vinyl mix was finally reissued (in 2010) by the Zappa Family Trust under the nom-de-disc "Greasy Love Songs." The 1995 Ryko CD adds some new cover/booklet artwork, but is otherwise like previous CDs. The 2012 CD is identical to earlier CDs.
ESSENTIAL VERSIONS FOR COMPLETISTS: 1) Original vinyl/Greasy Love Songs CD; 2) any "Ruben" CD

From Record Collector magazine #93, May 1987 (quoted by Mikael Agardsson):

The US pressing came with a deluxe gatefold cover featuring some excellent Cal Schenkel artwork, most of which is missing from the original UK version. A very limited number of early US pressings also included a folder insert containing instructions on "How to dance the bop" and "How to comb and set a jellyroll".

After treating us to the full sleeves for Money and Lumpy Gravy, EMI decided against making it three in a row and issued the original UK version of Ruben in a non-fold sleeve.

From Record Collector magazine #93, May 1987 (quoted by Mikael Agardsson):

The 1973 Polydor UK re-issue was given a full gatefold sleeve, almost identical to the US release except that the catalogue number was moved to the top right-hand side of the front cover, where it was placed in a black circle, together with the full name of the group. This was the first Zappa/Mothers album to be released in stereo only.

When this album was re-released on CD, it was heavily remixed and new bass and drums had been overdubbed on most songs without any acknowledgment of this in the CD booklet, which still credited the original musicians. The new drums were played by Chad Wackerman; the new electric bass by Arthur Barrow and upright acoustic bass by an unknown musician, possibly Jay Anderson. The differences are huge; it's like a completely different album.

The remix is extremely controversial to many fans, and it is safe to say that an overwhelming majority hate it. Zappa said he thought it sounded better than the original. Zappa's sound engineer, Bob Stone, called the remix "classic stooge rock". While some people could in theory like the remix, every hard-core fan should definitely seek out the original vinyl, or a copy of it.

Cruising with Ruben & the Jets was one of the albums re-released on vinyl in the Old Masters box 1. It was not taken from an old master; instead it used the CD remix, except in the case of "Stuff Up the Cracks", which was the original mix. The new packaging included instructions on how to "dance the bop" and "comb & set a jelly roll". These were reproductions of two separate black & white pages, 8.5x11 inches, distributed for promotion only at the time of the original release, along with a blown-up version of The Story of Ruben & The Jets, a glossy photo of Frank (both from the back cover), and a jar of hair pomade.
The version of "Stuff Up the Cracks" on my Ryko CD (original release) is a different version from the original release AND the Old Masters version (which is otherwise identical to the CD with the overdubbed bass/drums).

We all know about the changed bass and drums. We all have our opinions (yeah, mine is negative, too). But in the Old Masters box, there was a note that while all the other songs were overdubbed and remixed, Zappa couldn't find the 8-track master to "Stuff Up the Cracks", and instead digitally retweezed the 2-track final mix. It sounded great, was the same mix as the original, and made one wish he'd just done the whole damn album that way.

On the CD, there are still no changes in the bass and drums, but the mix is SEVERELY different, adding saxophone lines that weren't there before, and crossfading the vocals into Zappa's guitar solo, undercutting its power (the solo is longer now, but what was its distinctive entrance - a musical "I'm here" - is now the end of another phrase, and is lost).

So did Zappa find the 8-track master and remix it for the CD, or did he mistakenly (or deliberately) use a different 2-track master from the original sessions? Maybe it doesn't matter to you, but this was my favorite "kids" album when I was growing up (I was born a few months before its release), I know it backwards and forwards, and the alteration BUGS ME! (As opposed to We're Only In It for the Money, which I heard for the first time in the Old Masters box, and while the original mix sounds "better" to me now, I still miss some of the newer mix).

The 1995 CD is the same as the controversial CD remix. The new packaging includes instructions on how to "dance the bop" and "comb & set a jelly roll". These were reproductions of two separate black & white pages, 8.5x11 inches, distributed for promotion only at the time of the original release, along with a blown-up version of The Story of Ruben & The Jets, a glossy photo of Frank (both from the back cover), and a jar of hair pomade. They also came with the Old Masters vinyl version. Official Ryko statement: "New master. New timing sheet. Restored artwork. This is the 1984 remix."

The new, 2012 UMe/Zappa Records CD contains the 1984 digital remix of Ruben with overdubbed drums and bass. It is reported to be identical to earlier reissues.
Bootleg CDs

Email ThisBlogThis!Share to TwitterShare to FacebookShare to Pinterest
Labels: Frank Zappa, Ruben and the Jets, USA