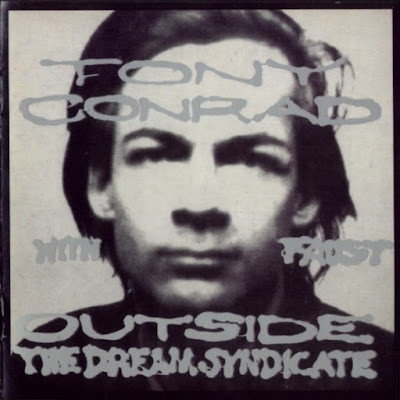 
Tony Conrad is an American multimedia and experimental artist. He is musically known in the 60's for his abrasive violin drones and collaboration in the American "Dream syndicate". In 1972 he visited the krautrock band FAUST at Wumme and recorded a first album with them called Outside The Dream Syndicate (1973). The album is a vast catalogue of shimmering drones for violin, accompanied by percussive minimalist pulses and moving bass guitar lines. The result is tripped out, engaging the listener in strange rituals (almost buzzing "raga" dreamy sounds. In 1993, when the album is reissued by Table of elements, Tony Conrad goes back to the scene (after a long break) and records an new solo album "Slapping Pythagoras" (1995) for sonic violin dissonances and harmonies. Eternal!

Krautrock, particularly the more experimental strand, always had an affinity with minimalism; think of Can's metronomic rhythms, Neu!'s single chord excursions and the lengthy, near-formless electronic drones of early Kluster or Tangerine Dream circa Zeit. It's perhaps a little odd that Faust, whose recordings were among the most intricate and complex of the krautrock genre, should have participated in this album, perhaps the ultimate minimalist statement of the era.
Only two members of Faust actually perform on this recording, bassist Jean Herve Peron and drummer Zappi Diemaier. They were one of the era's more muscular and inventive rhythm sections, capable of rocking out but also of playing with great subtlety when the music demanded it. From The Side Of Man And Womankind sees the stone age hooligan stomp of It's A Rainy Day, Sunshine Girl stripped down to the bare minimum; tom tom hi hat tom tom hi hat two note bass line dead on the beat and one note drone on the violin plodding along for 26 glorious, almost static minutes. Zappi occasionally forgets himself and includes a cymbal crash, and there are slight tonal variations in the violin drone, but it's about as basic as you can get and utterly mesmerising into the bargain. The boys from Faust get to cut loose, relatively speaking, on From The Side Of The Machines; tom toms played with mallets, cymbal crashes and at least 4 notes on the bass, the whole thing sounding like a fragment from Set The Controls For The Heart Of The Sun or a similar psychedelic journey looped and repeated ad infinitum, with the Tony Conrad's single note drone floating in space as always. The musicians manage to create an enormous amount with almost no resources whatsoever, and they manage to make an eerily uplifting sound although it sounds like they're straining to avoid any form of self expression at all.

The original album contained just those two mighty slabs of noise, but the reissue includes some bonus items. Two short pieces open disc 2; The Pyre Of Angus Was In is presumably a reference to Conrad's contemporary (and briefly member of The Velvet Underground) Angus Macalise and has a similar groove to From The Side Of The Machines, with Jean Herve Peron getting quite melodic on his bass. The Death Of The Composers sounds like an alternate take of the same piece, with a bit more psychedelic grooving from the rhythm section. From The Side Of Woman And Mankind brings proceedings to a close, and it's basically From The Side Of Man And Womankind taken at a slightly faster tempo. Peron's bass occasionally slips out of sync with the drums and there's a touch more variety in Conrad's bowing technique; if you've been paying attention and you've listened this far, it makes an enormous difference.

If you like the post rock of Godspeed You! Black Emperor and A Silver Mt Zion, John Cale's viola contributions to the Velvet Underground, the hypnotic grooves of early Can, the academic minimalism of Steve Reich, Terry Riley and Philip Glass, the side long drones of Soft Machine Third or pounding rhythms of Faust then this is essential listening. If you're not into minimalism it might just make a convert of you.
Posted by Zen Archer at 8:55:00 PM