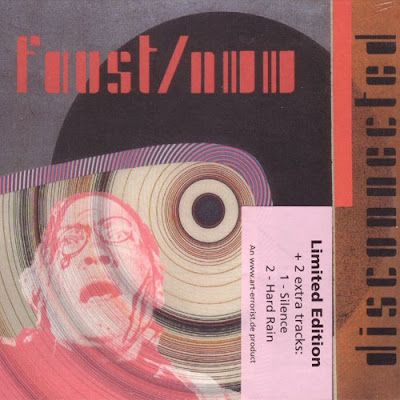 
Ha, finally Nurse With Wound makes it onto this site, albeit indirectly. NWW and Faust are both sonic innovators and there influence has been felt for decades. It is therefore a real treat to hear them together here for the first time. It's really such a logical pairing that I'm amazed it didn't happen earlier.
The best thing about this record is that it is a true collaboration, with neither artist overwhelming the other, and yet both individual styles remain intact. It is also about the rockiest I've heard Stephen Stapleton (the genius behind NWW) get, at least since his collaboration with Stereolab. Now I should fully disclose that I am more of a Nurse fan than a Faust fan, although I certainly enjoy their work as well, particularly their first album.

What Disconnected consists of primarily is a mix between freeform, Krautrocky jams and surreal electronics with found sounds and samples. The first track is a very Fausty rock piece, but as it progresses layers of shimmering noise are superimposed on top until you the band is barely audible. It has a very nice hypnotic quality to it, and really sucks you into the world of these two artists.

The title track is for me the least interesting. It is a minimal electronic backdrop, with a sampled voice repeating the word Disconnected every once in a while. Here, Stapleton uses his recent favorite technique of time stretching words until they become unrecognizable. As much as he has used this simple process in recent years, it still has not gotten old for me, however, and gives the music a quite druggy feeling.

The third track is a drum loop, with all kinds of craziness gradually unfolding on top of it. Probably my favorite track on the record, it reminds me a lot of White Light From The Stars In Your Mind, from NWW's Man With The Woman Face album. About halfway through the drum loop stops abrubtly and we get dark, spooky soundscapes. Don't worry though, the drums come back eventually.

The final track (on my copy. Silence and Hard Rain were included without Stapleton's approval and were yanked from later copies) is another Fausty jam that lasts just long enough to make you feel crazy. A perfect ending!

Overall, this is a very good collaboration, although still not even with the best work of either artist. Disconnected is a very apt title, because the music here is disjointed and will make you feel paranoid and alienated. I highly recommend it to Krautrock fans who have not heard Nurse With Wound before. I think you'll be in for a treat.
Posted by Zen Archer at 2:24:00 AM