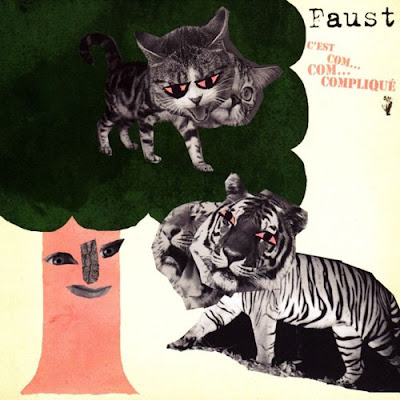 
Since returning to the public eye in the early 1990s, this legendary Krautrock collective has been a lot more prolific than I would have expected. I remember when Rien hit the shelves, and I thought it was a miracle that such a mercurial and fleeting band (their early 70s heyday lasted just a few years) would actually return to create new music that was, if such a thing is possible, even more far-out than the music for which they achieved their notoriety. But back they were, and Rien was such a difficult listen (lots of abstract noise and lots of silence, even more so than the typical Faust album) that I thought for a while that the band's subsequent releases might not interest me that much, so I stopped following them. However, several years later I took the plunge and found that Faust had indeed returned to the adventurous Krautrock spirit they helped define, and were continuing down their old path while pushing in new directions at the same time.
This album is one of their most sophisticated releases, not exactly accessible, but with a depth and texture that is sometimes lost in their more strident material. The overall mood is somber and subdued, with lots of drones underscoring slow robotic beats, spoken lyrics, and gently buzzing synths. It's not all monochromatic, happily: variety appears in tracks such as "Petits Sons Appetissants", a gently sung waltz with acoustic guitar and piano accompaniment. And it's not all quiet, as the heavy droning pulse of "Bonjour Gioacchino" will attest. The longer tracks, however, are generally quieter and more contemplative than the average Faust tune. I hesitate to say "Faust Lite", but when you consider Faust's legacy, that still allows for some pretty avant garde stuff, and that's in fact what we have here. It's just dressed up in smoother textures than their more "out" albums (e.g. The Faust Tapes).

I think this album would appeal to fans of "So Far" and "Faust IV". It's a great example of Faust's continued vitality in the new millenium. It doesn't try to replicate the music of their past, but it doesn't leave it behind, either. It's a continuation of where they have been going all along, forward along their own path. The fact that they now sound more contemporary than they did in the 1970s is probably evidence that the rest of the music world is only now coming around to the novel ideas they brought to the table so long ago.