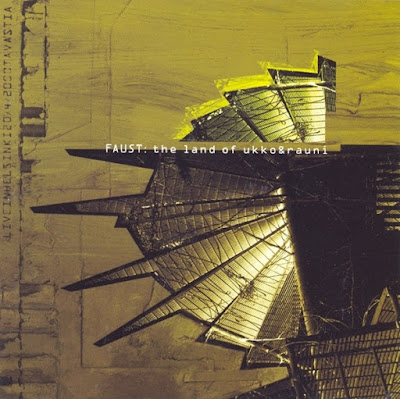 
A concert (84 minutes) by the current incarnation of the reformed band (original members Werner Diermaier & Hans Joachim Irmler, long-serving American guitarist Steven Lobdell, and relative newcomers Lars Paukstat & Michael Stoll), recorded in Finland April 20, 2000. As always with Faust, things are never predictable or easily categorized, and for the most part, the individual pieces tracked on the CD's (7 on the first, 3 on the second) flow into one another with only subtle differentiations at the track boundaries. Beginning with sounds that might best be described as "bowed whales", eventually dissolving into a maelstrom of other oceanic noises... Single-mindedly near-industrial rhythms with organ swells and non-dissonant stabs... Throbbing, burbling and echoing dramatic keyboard melodies... Pulsating electronic rhythms under soaring space guitar leads... A bit of sheet metal work accompanied with woodwinds... The lengthy, evolving "As You Might Know (du weisst schon)" as a suitably crescedant climax to the first disc... Mysterious growling & grunting over the classic Faust mechanical-device-slowly-careening-towards-failure beat... Noises that could have been equally plausibly created by guitars, electronics, or power tools... Jangly guitar wash & wah and fuzz organ as a 60's chanson jam complete with heavy percussive breathing... that's all some of it, at least. Despite the dissonances so prevalent through the set (consistently moreso with this 90's incarnation than the original 70's one), there are many moments that scream out - "THIS IS MUSIC!" And Faust continue to make music (with noise) more interesting, diverse and compelling than most of the head music bands around now or then, be they psych/space/prog/stoner/kraut.
Posted by Zen Archer at 12:38:00 AM