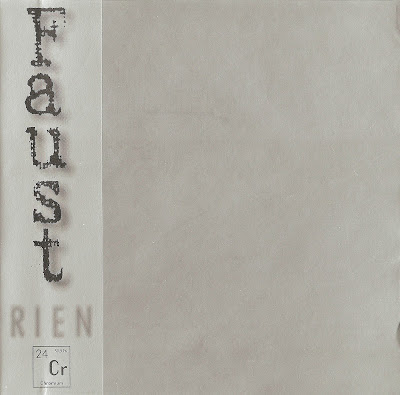 
Rien was Faust's 'comeback' album - apparently they never really went away, but it was their first release of new material in 20 years (not counting previously unissued 70s material). Comebacks can be a mixed blessing, but since their return to active service Faust have released some of their strongest material and have turned in some remarkable live performances.
The basic tracks were recorded during an American tour and were subsequently assembled into this album by Jim O'Rourke, whose contribution is at least as important as that of the two founder members. The sound is the heavy, industrial side of the original albums dragged brutally into the 90s - there are none of the acoustic interludes or eccentric fragments of song that cropped up on their early albums. Jean Herve Peron and Werner 'Zappi' Dermeier lay down dense, lumbering rhythms over which the various guest musicians weave all manner of strange and sometimes disturbing sounds. The packaging was also in keeping with the band's traditions - the 8 page booklet was a uniform blank metallic grey, and the spoken credits are the last track. Outstanding tracks include Long Distance Calls In The Desert, a field recording (from Death Valley apparently) of the band and some fans playing wind instruments in the desert night, and the 15 minute long trance-rock epic Listen To The Fish. Eroberung der Stille, Teil 2 features the palintive sound of Gorecki's Symphony No.3 gradually disappearing beneath layers of industrial noise, a piece of art terrorisim that could have misfired badly in the wrong hands but which works here, perhaps because Faust are not attacking the music itself but rather the way in which it has been appropriated as a lifestyle accessory and the way that fragments of it are used in adverts and soundtracks.

In the 20 years between Faust IV and Rien bands like Einsturzende Neubaten and Nurse With Wound had continued to explore the territory Faust had opened up with their early 70s releases, so the shock value was somewhat diminished. Despite the fact that they no longer sounded so raw and original, Rien demonstrated that they had moved with the times and remained as uncompromising as ever. Not an essential release, but highly recommended to any fans of the wilder side of Krautrock.