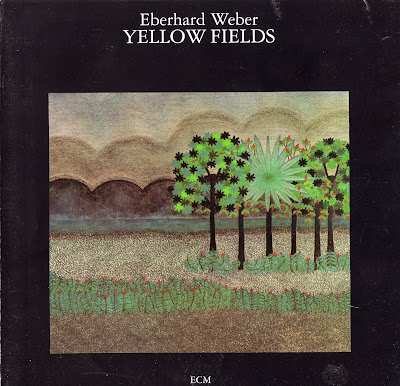 The German double-bass player Eberhard Weber (born 1940) is known for his work in three different ''incarnations'': as one of the representative artists of the prestigious ECM label, as a member of Norwegian saxophonist Jan Garbarek's band (which also records for ECM), and as a member of the United Jazz+Rock Ensemble, a first-rate multinational fusion band. With a background like this, Weber is often assumed to be a typical jazz musician. It goes without saying that jazz is Weber's natural element, and most of the albums he released on ECM are natural developments of the styles first developed by Miles Davis on his seminal albums ''Kind of Blue'' and ''In a Silent Way''. However, Weber's compositions are also influenced by minimalistic music and by romantic European concert music. Moreover, Weber has written a number of ambitious multi-movement suites, and (just like his ''boss'', Jan Garbarek) he often favours a firm but catchy rock beat. To this combination of factors must be added that Weber's long-time collaborator Rainer Brüninghaus (a keyboards player) favours lush electric piano solos and, occasionally, a rich mellotron sound. As a result, some of the great Eberhard Weber's albums from the early 1970s, such as ''The Colours of Chloë'' and (especially) ''Yellow Fields'', bear a more than passing resemblance to the classic symphonic prog albums of that era. This is probably not a coincidence: like virtually all jazz musicians of his generation, Weber must have listened a lot to the rock music that was in the air, and albums like ''A Saucerful of Secrets'' or ''In the Court of the Crimson King'' will not have escaped his attention. The main difference between symphonic prog and Weber's own music is that Weber never uses electric guitars, Hammond organs or fancy synths as solo instruments; he generally prefers the saxophone (as played by lyrical virtuosi such as Charlie Mariano) as well as Brüninghaus's pianos and even the ocarina (on ''The Colours of Chloë'').

At the age of six Eberhard Weber received his first music lessons from his father, a classical cellist. Young Eberhard initially played the cello as well, but he switched to double bass when that instrument was needed in his school orchestra. In the 1960s Weber joined pianist Wolfgang Dauner in a jazz trio which eventually turned into Et Cetera, one of the earliest German fusion bands. In the early 1970s Weber also played with vibraphonist Dave Pike and fusion guitarist Volker Kriegel. In 1972 Weber had the body of a double bass removed to turn the instrument into a unique electro-acoustic hybrid. This revolutionary new instrument allowed Weber to be heard far more clearly on stage, and to develop a uniquely plangent sound, by plucking the strings.

Weber employed his new bass to superb effect on certain albums where he appeared as special guest, such as Gary Burton's ''Ring'' (1974) and ''Passengers'' (1977) as well as Pat Metheny's ''Watercolors'' (1977). All of these albums bear similarities to the symphonic fusion pioneered by bands like Brand X and Pierre Moerlen's Gong, albeit that, in typical ECM fashion, lyricism is much more important than flashy virtuosity. Around the same time, Weber created a number of impressive masterpieces under his own name, above all ''The Colours of Chloë'' (1973), ''Yellow Fields'' (1975), ''The Following Morning'' (1976) and ''Silent Feet'' (1977).

In the 1980s Weber lost his enthusiasm for being a band leader, and after 1985 (apart from being a member of Garbarek's touring band) he played mainly solo concerts, using a sophisticated technique of tape loops and delay to accompany himself. Even though Weber's music is mainly melancholic in nature, his solo performances are highly entertaining affairs, as he treats his audience (between numbers) to an inexhaustible supply of comic anecdotes in fluent English, when abroad. Weber's solo playing can be heard to great effect on ''Orchestra'' (1988) and especially on the magical ''Pendulum'' (1994).

To the delight of his fans, Weber finally released an entirely new band album in 2000, ''Endless Days''. Unfortunately it turned out to be a lacklustre affair, with little of the flair of his 1970s albums. In 2005, however, Weber's 65th birthday was celebrated in style, with a gorgeous series of concerts featuring Gary Burton (vibes), Wolfgang Dauner (piano), Jan Garbarek (sax) and the Stuttgart Radio Symphony Orchestra. All the most exciting tunes from Weber's long solo career received an airing, and the concerts resulted in an exceptionally fine live album, ''Stages of a Long Journey'' (2007).

In 2007 Weber suffered a stroke and was forced to cancel a world tour with Jan Garbarek's band. At the time of writing (August 2009) he is still recovering from his stroke. Let's hope he soon returns to the stage, to regale us with his inimitable playing.

Of all of Eberhard Weber's classic albums, YELLOW FIELDS is probably the most likely to appeal to the average prog fan. First of all, it opens with "Touch", the most "symphonic" piece Weber has ever recorded without using an orchestra: a lush, stately, moving instrumental ballad featuring gorgeous mellotron, with the main melody performed by Charlie Mariano's lyrical sax, Rainer Brueninghaus's synth and Weber's own plangent bass playing in unison. "Touch" remains utterly delightful, a highlight in Weber's oeuvre.
The remainder of the album's original A-side is taken up by the fifteen-and-a-half minute "Sand-Glass", which is strongly reminiscent of mid-seventies Weather Report, especially because Brueninghaus's playing on Fender Rhodes borrows a trick or two from the late Joseph Zawinul. As the title of the piece suggests, the beat is rockier and steadier than with Weather Report (not polyrhythmic) and the main melody sounds somewhat hesitant, at least until Mariano switches from sax to an Indian wind instrument (either shenai or nagaswaram, I don't know which) and the piece suddenly acquires wings! It's another magic moment on a deeply satisfying album.

YELLOW FIELDS' B-side opens with the ten-minute title track, one of the sprightliest tunes Weber has written, beautifully played by Mariano on soprano sax. The real highlight of this piece, however, is Brueninghaus's exciting Fender Rhodes solo. Together with the magisterial Weber and the energetic Jon Christensen (on drums) Brueninghaus is also the star of "Left Lane", the thirteen-and-a-half minute closing track. Once again he shines on Fender Rhodes, but the piece also contains an intriguing extended break for solo piano, reminiscent of Yes's "South Side of the Sky" but much better recorded and played with far greater subtlety.
Posted by Zen Archer at 2:19:00 AM