Chick Corea
1969
Is (The Complete IS Sessions) 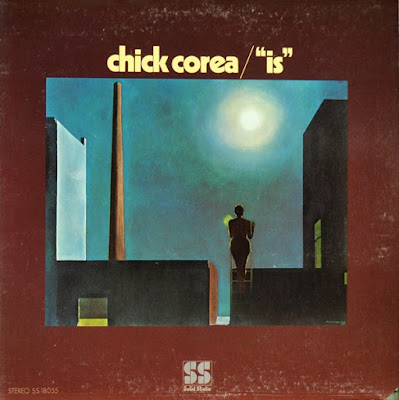 The Complete "Is" Sessions is a 2002 Blue Note Records compilation / re-issue album by Chick Corea of material recorded in May 1969. The material of the "Is" sessions was released originally in 1969 as two separate albums on two different record labels. The songs "Is", "This", "Jamala" and "It" were issued as Is on Solid State Records, whilst the remaining songs were released as Sundance on the Groove Merchant label. The 2002 Blue Note double CD package also includes alternate takes from the original recording sessions.

Although the recording of Chick Corea's The Complete "IS" Sessions took place in May of 1969, the rhythm section, which consists of bassist Dave Holland, drummer Jack DeJohnette, and legendary Latin/hard-bop/fusion pianist Chick Corea, found its footing seven months earlier in the electric tone poems of the In A Silent Way sessions under Miles Davis's leadership.

The Complete "IS" Sessions, a two-disc set reissued on Blue Note's Connoisseur Series, is a musical example of the exploratory sound of 1969. On IS, Corea, Holland, and DeJohnette largely break into the "new thing" or avant-garde with the help of hard bop players Woody Shaw and Bennie Maupin, flutist Hebert Laws, and percussionist Horace Arnold. It contains material previously released as Is on Solid State and Sundance on Groove Merchant.

Disc one begins with "It," a 28 second classical duet between flutist Laws and Corea that is based on an original Corea composition called "Trio for Flute, Bassoon, and Piano." "The Brain" and "This" add saxophonist Bennie Maupin to the mostly avant-garde nature of Corea's playing, which sounds like the pianist's '68 Blue Note album, Now He Sings, Now He Sobs.

"The Brain" states the head in unison four times, with bass and drums starting and stopping like an engine that won't turn over. Corea slams down block chords like his classical influence, Chopin, and the rhythm section begins to cook with the intensity of a summer thunderstorm. Corea plays long, French impressionistic lines mixed with abstract improvisation while Maupin lays sheets of Coltrane-influenced tenor lines on top of the rhythm.

"This" breaks into free jazz territory, with Maupin dodging in and out of Corea's lines on electric piano. It's not suprising that Corea's soloing on "This" has the seemingly chaotic but controlled intonations of Herbie Hancock considering they both played in Miles Davis's free bop quintet on Filles De Kilimanjaro. Over five minutes of "This" is dedicated to showing off the simultaneous improvisation between Holland and Corea. The fourth selection on disc one is "Song of the Wind." Lyrical and contemplative, this piece is built around a never-ending theme that sounds like a tone poem from Corea's Return to Forever.

Trumpeter Woody Shaw, who played with Corea in Willie Bobo's band during the early '60s, is featured on the last track of disc one. "Sundance" begins with improvisation between Holland and Corea that is reminiscent of the haunting start of Wayne Shorter's "Sanctuary," which both helped record four months later on Bitches Brew. Percussionist Horace Arnold adds drums to DeJohnette's agressive playing on "Sundance." The highlight of the alternate tracks on disc one are a softer take of "Sundance," showcasing a lighter style of DeJohnette.

"Jamala" introduces the free-form style that is prevalent throughout disc two of the "IS" sessions. The piece, composed by Holland, is over fourteen minutes of avant-garde ramblings, unstated tempos, and dissonant piano chord changes. "Converge" unwinds mysteriously with a four-note theme in the beginning and Corea comping without any context.

"Is" is a 28 minutes of free association, a free jazz opus which symbolizes the experimental attitude that was present in American music and society in the late '60s. The alternate track of "Jamala" is shortened to under nine minutes, helping to end the "IS" sessions on a more cohesive note.
Posted by Zen Archer at 4:00:00 PM