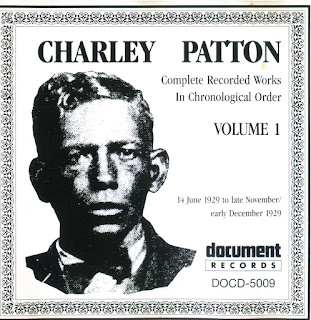 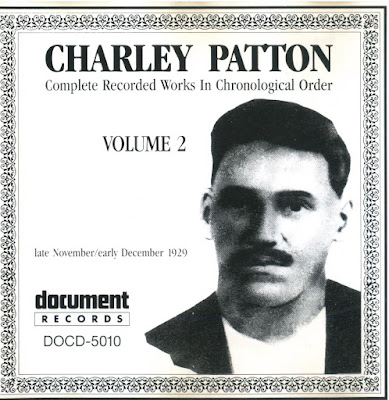 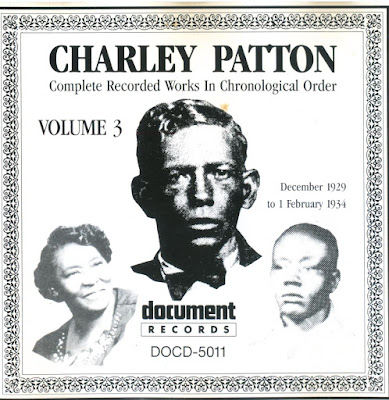 
Patton is considered, with some justification, to be the archetypal, Mississippi Delta blues singer / guitarist. His guitar playing, including his bottleneck slide guitar technique, coupled with his gritty vocal delivery created a mixture of some of the most primitive yet sublime recordings to be made in the "pre-war blues" era. Many of his recorded performances are so powerful as to be unsurpassed within the genre. At the same time he had an overpowering presence that embodied the very essence of the Mississippi Blues. Equally, he can well be thought of as a songster, in view of his wide-ranging repertoire of blues, ballads, rags, spirituals and popular songs that he displays on his recordings which are presented on Document's three volumes of Charley Patton's recordings. Certainly, he was a showman and entertainer whose live performances could be sombre, melancholy, intense or humorous. Yet he differs from his "songster" contemporaries like Mississippi John Hurt and Mance Lipscomb in that he used solid blues as a vehicle for an intensely personal musical expression. These three volumes present all of his issued recordings. His original 78 rpm records are extremely rare. In many cases there are only single known copies which are now the prized possessions of collectors.

Volume one is full Patton classics beginning with the stunning Mississippi Boweavil Blues with Charley increasing the speed of the tempo to fever pitch, gasping at the end of his lines and playing frenetic slide guitar, lap style, hitting the notes perfectly way beyond the twelfth fret. There's certainly no hint of debut performance nerves here. Spoonful Blues demonstrates another remarkable slide guitar performance and there is little wonder that the song was picked up by many others such as his great admirer Howling Wolf (Chester Burnett) and 1960's British super group; Cream led by Eric Clapton. The ragtime showpiece Shake It and Break It is a lively affair and conjures up the image of Charley doing the "clowning" during his live performances that so appalled his friend Son House. This entailed Charley playing his guitar behind his back and between his legs. Jimi Hendrix was doing exactly the same thing forty years later, though its not known that Charlie set light to his guitar! The CD covers all of Charley2s first session for Paramount and the first six recordings made for Paramount in late 1929 on which he is accompanied by the violin player Henry Simms who can also be found accompanying Muddy Waters on Library of Congress Recording made in Mississippi thirteen years later (Document DOCD-5146 'Muddy Waters (1941 - 1946)').

At his second recording session Charley recorded Green River Blues, which is possibly one of his older pieces. Farrell Blues, a tribute to his hometown, and the venerable Come Back Corrina feature vocals by fiddler Henry Sims. These are pleasant, if unadventurous performances with Patton confining himself to a strummed guitar accompaniment.
The two takes of Hammer Blues (correctly titled “Hammock Blues”) are very similar and exude a curious feeling of enervation. Magnolia Blues and When Your Way Gets Dark are virtually alternative takes of the same song, with shimmering slide guitar playing and snapped bass strings. Sadly, the only surviving copy of Heart Like Railroad Steel has a great deal of surface noise but this fails to mask what is an exceptional performance, even by Patton’s own high standards.
Completing the session were two sanctified pieces, Some Happy Day, with slide echoing the voice, and You’re Gonna Need Somebody When You Come To Die. A further day’s session produced another 10 Patton masters plus 2 more Sims vocals. The 2-part Jim Lee Blues celebrates a Mississippi river boat that plied between Vicksburg and Memphis. It includes fragments of “Red River Blues” and “Poor Boy” and even verses that connect it with black minstrelsy.
More typical of the latter-day Patton is the 2-part High Water Everywhere, a graphic account of the 1927 Mississippi River flood which sounds completely spontaneous, even though recorded nearly three years after the event and almost certainly not totally improvised in the studio. This gripping tour-de-force was, deservedly, very popular.
Rattlesnake Blues, a May 1930 release, was one of the best of the Patt

Volume three features the last nine sides released on the Paramount label and twelve sides which Charley recorded for the American Record Company and released on the Vocalion label. Henry Simms is with him on five of the Paramount sides giving a string band feel to the performances whilst the great Mississippi guitarist and Robert Johnson's "friend" Willie Brown (Document DOCD-5002) gives his contribution most notably on Moon Going Down and Bird Nest Bound. Charley's common-law wife Bertha Lee is the lead vocalist on Yellow Bee and Mind Reader Blues and provides vocal support on the two religious titles Oh Death and Troubled 'Bout My Mother. This CD and the collection of all of Charley Patton's released recordings presented on Document, is rounded off with the reflective Poor Me createing a strange melancholy mood which is then, perhaps characteristically shrugged off by the ragtime dance tune Hang It On The Wall.

If the Delta country blues has a convenient source point, it would probably be Charley Patton, its first great star. His hoarse, impassioned singing style, fluid guitar playing, and unrelenting beat made him the original king of the Delta blues. Much more than your average itinerant musician, Patton was an acknowledged celebrity and a seminal influence on musicians throughout the Delta. Rather than bumming his way from town to town, Patton would be called up to play at plantation dances, juke joints, and the like. He'd pack them in like sardines everywhere he went, and the emotional sway he held over his audiences caused him to be tossed off of more than one plantation by the ownership, simply because workers would leave crops unattended to listen to him play any time he picked up a guitar. He epitomized the image of a '20s "sport" blues singer: rakish, raffish, easy to provoke, capable of downing massive quantities of food and liquor, a woman on each arm, with a flashy, expensive-looking guitar fitted with a strap and kept in a traveling case by his side, only to be opened up when there was money or good times involved. His records -- especially his first and biggest hit, "Pony Blues" -- could be heard on phonographs throughout the South. Although he was certainly not the first Delta bluesman to record, he quickly became one of the genre's most popular. By late-'20s Mississippi plantation standards, Charley Patton was a star, a genuine celebrity.

Although Patton was roughly five foot, five inches tall and only weighed a Spartan 135 pounds, his gravelly, high-energy singing style (even on ballads and gospel tunes it sounded this way) made him sound like a man twice his weight and half again his size. Sleepy John Estes claimed he was the loudest blues singer he ever heard and it was rumored that his voice was loud enough to carry outdoors at a dance up to 500 yards away without amplification. His vaudeville-style vocal asides -- which on record give the effect of two people talking to each other -- along with the sound of his whiskey- and cigarette-scarred voice would become major elements of the vocal style of one of his students, a young Howlin' Wolf. His guitar playing was no less impressive, fueled with a propulsive beat and a keen rhythmic sense that would later plant seeds in the boogie style of John Lee Hooker. Patton is generally regarded as one of the original architects of putting blues into a strong, syncopated rhythm, and his strident tone was achieved by tuning his guitar up a step and a half above standard pitch instead of using a capo. His compositional skills on the instrument are illustrated by his penchant for finding and utilizing several different themes as background accompaniment in a single song. His slide work -- either played in his lap like a Hawaiian guitar and fretted with a pocket knife, or in the more conventional manner with a brass pipe for a bottleneck -- was no less inspiring, finishing vocal phrases for him and influencing contemporaries like Son House and up-and-coming youngsters like Robert Johnson. He also popped his bass strings (a technique he developed some 40 years before funk bass players started doing the same thing), beat his guitar like a drum, and stomped his feet to reinforce certain beats or to create counter rhythms, all of which can be heard on various recordings. Rhythm and excitement were the bywords of his style.

The second, and equally important, part of Patton's legacy handed down to succeeding blues generations was his propensity for entertaining. One of the reasons for Charley Patton's enormous popularity in the South stems from his being a consummate barrelhouse entertainer. Most of the now-common guitar gymnastics modern audiences have come to associate with the likes of a Jimi Hendrix, in fact, originated with Patton. His ability to "entertain the peoples" and rock the house with a hell-raising ferociousness left an indelible impression on audiences and fellow bluesmen alike. His music embraced everything from blues, ballads, ragtime, to gospel. And so keen were Patton's abilities in setting mood and ambience, that he could bring a barrelhouse frolic to a complete stop by launching into an impromptu performance of nothing but religious-themed selections and still manage to hold his audience spellbound. Because he possessed the heart of a bluesman with the mindset of a vaudeville performer, hearing Patton for the first time can be a bit overwhelming; it's a lot to take in as the music, and performances can careen from emotionally intense to buffoonishly comic, sometimes within a single selection. It is all strongly rooted in '20s black dance music and even on the religious tunes in his repertoire, Patton fuels it all with a strong rhythmic pulse.

He first recorded in 1929 for the Paramount label and, within a year's time, he was not only the largest-selling blues artist but -- in a whirlwind of recording activity -- also the music's most prolific. Patton was also responsible for hooking up fellow players Willie Brown and Son House with their first chances to record. It is probably best to issue a blanket audio disclaimer of some kind when listening to Patton's total recorded legacy, some 60-odd tracks total, his final session done only a couple of months before his death in 1934. No one will never know what Patton's Paramount masters really sounded like. When the company went out of business, the metal masters were sold off as scrap, some of it used to line chicken coops. All that's left are the original 78s -- rumored to have been made out of inferior pressing material commonly used to make bowling balls -- and all of them are scratched and heavily played, making all attempts at sound retrieval by current noise-reduction processing a tall order indeed. That said, it is still music well worth seeking out and not just for its place in history. Patton's music gives us the first flowering of the Delta blues form, before it became homogenized with turnarounds and 12-bar restrictions, and few humans went at it so aggressively. 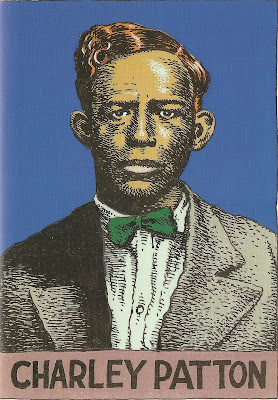