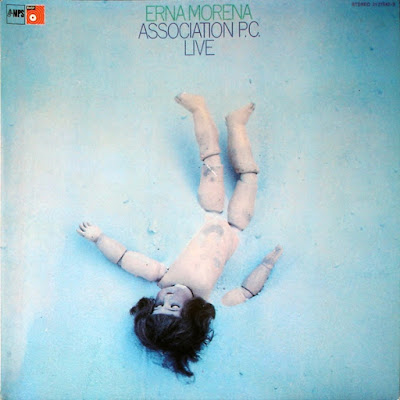 Budubb Budubb Budubb Badadubb Budubb Budubb Budubb Badadubb - Erna Morena starts with Siggi Busch's bass of Frau Theunissen's Kegel, which then takes off as a wild, fast and furious 7/8 orgy of jazz rock with Pierre Courbois's superbusy drums and some plainly incredible solos. This is one of the best pieces of jazz rock I have ever heard. Particularly Jasper Van't Hof on his distorted e-piano blows away my ears with what he is doing here, but also guitarist Toto Blanke is very inventive, after Karl-Heinz Wiberny on saxophone introduced the solos in a more conventional way. The band strikes a perfect balance between free (and at times atonal) creativity and energetic rock feeling. The remainder of the album is the title track, a long suite that has five parts but is basically just a single opus. On vinyl it is cut into two halves somewhat clumsily (but perhaps unavoidably) between the A and the B side because it's just too long for one side; I'd be curious whether there is any version out there where one can hear the whole thing from beginning to end. Anyway, this is a somewhat different animal from Frau Theunissen. Much more of this is influenced by bandleader Pierre Courbois' free jazz background without a straight rhythm and a transparent harmonic concept. Something more rhythmic and rocky happens again at the end of side A and the beginning of side B. A rhythmic pattern on the e-piano, later joined in by again fast and wild drums, emerges out of a calmer drone-like part on the organ that makes me imagine a desert and has some arabic influences, together with a meditative bass line; something fast is always present as both drummer Pierre and pianist Jasper can't stop themselves from making things buzzing and moving around. Earlier on side A the band creates a spacey atmosphere with Jasper and Toto producing some longer open sounds behind which as ever the drums and the bass and the saxophone are jumping around. It starts rather noisily but becomes quite relaxed and even calm at times despite the amount of notes piled up by the musicians. Still it is always atmospheric, ever evolving and surprising. On side B, after the most rocking part of the Erna Morena suite has ended, things calm down again and come almost completely to a halt with some cymbal and hi-hat sounds, some less conventional calm percussion and some bass, before Jasper takes again off into outer space with Siggi now using a bow on his bass (I think). This develops into a short part with relaxed jazz drum and bass and a crazy guitar solo. Later the initiative is taken again mainly by Jasper on organ and e-piano and Pierre, who just can't stop. There is a rather dynamic stretch with some calm, some rhythmic and some rather loud and noisy parts in quick succession. Pierre then gets a fairly long well structured drum solo before the whole band says goodbye with a short intense rhythmic part with one of these crazily unpredictable jazz melodies, before we hear the audience celebrating the band for more than a minute.
Overall this is extremely inventive, exciting and intense music bringing together rather free and experimental jazz with some rock elements and feeling creating a very atmospheric and emotional music (which although may be difficult to stomach for listeners who are into more conventional harmonic and melodic music), played at a very high level of skill. I bought this on a flee market in the early eighties and in more than 30 years this album never failed to impress me. I heard two studio albums of Association P.C. which I didn't like as much as their live offering here, which is just so much more lively and pulsating.
Posted by Zen Archer at 1:46:00 AM