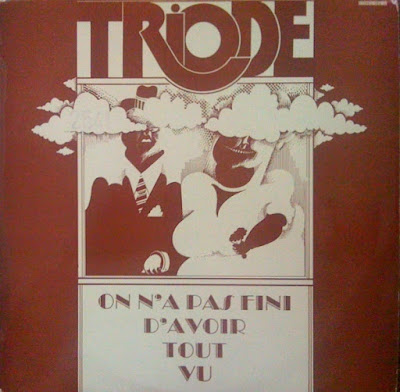 
One of the most delightful and charming little albums you're ever likely to come across, Triode's sole album is the sort of album that washes your hair before it sings gently in your ear.

With a flute song from distant gardens and a genuine feel of 1970s nostalgia with twinkling cymbals, wooden congas and a slow coarse guitar that sweeps its way through the music like a janitor on acid, - the music filling up your room is one of slow hazy psychedelia lead jazz rock. Every time I play this one, I get the feeling of sitting on a heather shrouded meadow with all kinds of freaky people hanging around on the grass - eating fruits, grooming beards, jumping through fiery hoops, making love in trees and generally just having a funky good old time with everything. This music is being played continuously from up on high, where small midgety folks have decorated the forest treetop line with dozens of Bose speakers. It gives off a certain frivolous kitchen-party-in-the-rough kind of feel, and instantly makes people feel better about their lives, what they're doing with it, and perhaps moreover forget everything nasty in it. Triode feed off your willingness to become one with your lawn, and while not far off Jethro Tull's bluesy flute rock debut - this one seems altogether more with it - in tune with the times surrounding it. Sure it sounds like it was made in 69 with all the bluesyness of the guitars and bass licks, yet the nicely recorded percussions as well as the delicate and jazzy flute make this thing into something timeless.

I like to listen to this at parties, where I sneak in with my I-pod and wait for people's incompetence to play music continuously, and then swooof like a great big leopard I swoop over the controls and let this wonderful chill, saucy, funky, warm, electric, sweaty, jazzy, bluesy and earthy like the very colour of its cover art - music roll over the unsuspecting crowd.

There is indeed something earthy about Triode. An immense musical root network which has buried its feet deep beneath the surface of the soil........... Maybe that's why I always get these hippie images of heathers and people partying on lawns with this thing? Either way, it's the single most alluring part of this album - that warm, earthy feel permeating it.

I played this to my black bird friend I've named Charlie. He sits in the highest pine tree in my folks' garden. Come noon he'll be tooting his horn about whatever it is that birds talk about (Flying methods and possible readjustments perhaps?), and here the other day I had this album playing from a small pair of MP3 speakers resting cosily in an Agave cactus. The moods of the flute seemed to interest him, and at one point I was under the impression that he threw a spastic fit, during a flute spitting manoeuvre of one of the more rocking sections - completely out of his head jumping halfway down the branch - collecting himself enough to jumble back on top of it with an intensive and life invigorating PEEEEP - the likes I normally only hear when there's brown feathered women about him.

So there you have it. This album is so good, it naturally attracts different species. Just think about what amazing get togethers you could throw, if you would be able to expect giraffes and squirrels attending.