The Nihilist Spasm Band
1968
No Record 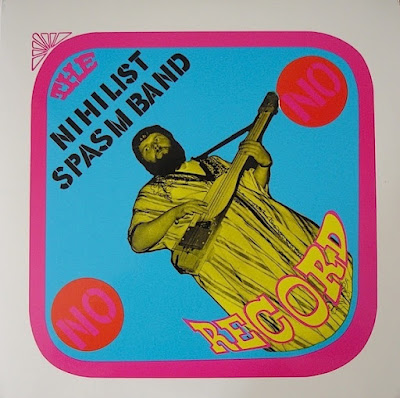 Nihilist Spasm Band was formed in London, Ontario in 1965 and soon became one of the weirdest music collective to the present day. Back in the late '60s music became flooded with flower power fashion and everyone tried to join a 'rock'n'roll' band, but there were still a lot of groups who didn't care much about the fashion and tried to take their own music to the next level. Among them were experimental bands like Red Krayola, Cromagnon and a lot of others. Nihilist Spasm Band was even weirder than aforementioned groups and I can barely imagine a teenager, professor or anyone in particular buying their record solely because of the cover artwork, which looked pretty bizarre. Purchaser probably expected some innocent novelty record – but what happened next probably shocked them. We are talking about 1968, remember that. Sure you had a lot of freak'n'roll music around, but mostly people were used to regular radio friendly music (not that today is any better, even worse).
From the very start of their album you can hear loud growling voice screaming: "Destroy the Nations. England is dead! Destroy America. Sheuggghhhh on Canada!". You can only imagine how the recent LP owner felt when hearing this.
In the following interview we will go through their musical journey. They are still active after so many years. The beginning can be attributed to Greg Curnoe (1936-1992) (among other factors), who was a film director and wanted to do a soundtrack for his upcoming 16 mm film.
Curnoe decided to do something unconventional and bought a lot of kazoos and gathered some friends to perform free-improvisations using aforementioned instruments. They realized they are enjoying improvisational performance and after soundtrack was made, they built larger kazoos and added one-string acoustic bass and also an unusual drum set. They made another step and plugged everything into electricity. Soon they added electric guitars, electric violin, theremin and everything that they felt it was cool. Even building weird instrument like 'noisemaker' and stuff like that didn't stop them. They went further, recorded and toured in places like Paris and London, but most of the time they were really an obscure collective of friends, playing whatever they liked and that is the main reason why I find them as one of the most interesting groups.
I have always been a lover of improvisational music. I think a lot of people have whole different perception when it comes to improvised or experimental music. Technical ability is highly regarded among most of the regular listeners, but for me that is not important aspect of music; meaning that I truly believe music is an extension of individual performer who is translating the language of his soul or emotion into the language of music and when everything is made without any restriction or intention, catharsis is possible. To understand music you don't need any education, because music is the language we all can understand. We will always cope with obstacle of moral nature, which individual listener is experiencing while listening to music and his perception of understanding.

"NO" is a fine word to use in the advancement of the musical form. Say "NO" to accepted conventions,"NO" to corporate rock, "NO" to popularism.This record says a big "NO" to all of these things, and more;maybe even to itself!
Like biological evolution, where spontaneity and random actions lead to something better and beautiful; improvised "music" on improvised instruments lead to something similar.
If one had an infinite number of Nihilist Spasm Bands, we would end up with everything from Mozart's 40th to a Tony Conrad one note drone,or even "The Birdy Song".
Its NO coincidence that AMM and The Nihilist Spasm Band evolved at the same time,and have record covers with an inordinate amount of yellow on them! Evolution has a habit of producing a similar version on different continents,in different ways; and its also no surprise that it took both groups a decade to get another recording out. The new and unpopular is always shunned by the thronged masses, until it has either died or disappeared,or something even less desirable has evolved. The rise of Punk Rock related artworks in the late seventies made these groups seem relevant and even intellectual,when compared to the anti-intellectual stance of the charting Punks. A new market for extreme music rose from the ashes of the New Wave, and we could even be seen buying the new albums from AMM and that Nihilist Spasm lot.
What greater up yours to corporate rock could one have? A group that,in addition to the DIY home-made instruments, the members are encouraged to improvise,and the range of the improvisation is such that instruments are not tuned to each other, tempos and time signatures are not imposed,and the members push the ranges of their instrumentation by engaging in constant innovation.
Ahhhhhh, Freedom!