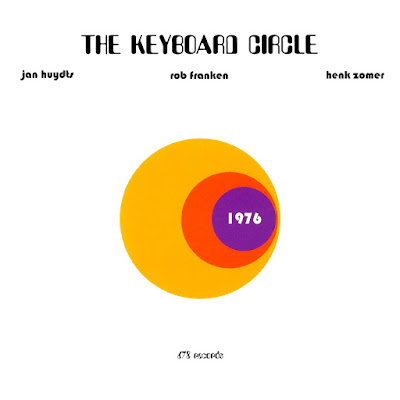 
I got clued to this by my buddy Ken. This is an offshoot of the Dutch jazz/rock group Scope. Scope released two albums of instrumental progressive fusion that were released on Atlantic Records in Germany only. They have never been reissued on CD. The Keyboard Circle was a short lived trio that consisted of ex-Scope members Rob Franken (Fender Rhodes and multi keyboards) and Henk Zomer (drums) as well as Jan Huydts (Fender Rhodes and multi keyboards). This is VPRO recordings from February 8, 1976 that have never been heard before. Heard before? No one outside of the group's hometown knew that the band existed until now. This is very good classic-era, kosmigroov. jazz/rock.

In 1976, the pianists Rob Franken en Jan Huydts (Third Eye)  both lived in Soest (Netherlands). They hung out together a lot, and shared their love for newly developed key instruments. Both of them were Fender Rhodes electric piano pioneers. Rob Franken's piano virtuosity is to be recognized on as many as four hundred records. In 1976, he had his own trio and performed with the Dutch funk fusion formation ‘Scope’ from the city of Zwolle. In this band, he met with drummer Henk Zomer, whom he was very impressed with.

At the end of 1975, Rob Franken came to the idea to start a new formation based on the combination of different consonance colors by combining Fender pianos with synthesizers, string cabinets and other electronic key instruments. Jan Huydts, who was experienced in making experimental music through his formations ‘Basic Train’ and ‘Third Eye’, thought this was a good idea. They decided to arrange their key instruments in a circle during their performances and so the ‘The Keyboard Circle’ was born.

The two musicians composed their own repertoire out of their own compositions and music covers. For example, on this record we find the Scope song ‘Tamotua’, Kenny Dorham’s ‘Blue Bossa’ and Eddie Henderson’s ‘The Kumquat Kids’. They decided to play the bass lines themselves, one by one, on a bass synth, while the other was playing his solo. The drums of Henk Zomer, clearly inspired by Jack DeJohnette and Tony Williams, became the driving force.

Soon after a few rehearsals the first performances took place. One of these first performances is to be found on this CD, recorded on February 8, 1976 in youth centre ‘De Trucker’ in Pijnacker, near The Hague. Han Reiziger, producer for VPRO radio had a craze for special jazz music and was not afraid to show his admiration for Rob Franken's work. He is the instigator of this special recording, that for reasons that aren't clear were never broadcasted. Whilst researching for a radio documentary the maker ran up against these tapes, which everyone had forgotten existed.

To begin with, the soundscape that reveals itself to you when listening to ‘The Keyboard Circle’ is a unique product of its time. Grounded in the mid seventies it’s no less than the works of Herbie Hancock and Chick Corea of those days. Exuberant swing and virtuous solos will find their way through your core. At the same time, the music is subdued in a typically Dutch manner. Most importantly, this music has its own sound, which can't compare to anything you’ve ever heard before.

Unfortunately, ‘The Keyboard Circle’ died at a young age. While Rob Franken was Toots Thielemans regular pianist, he had multiple radio and television performances, taught at the conservatory and above all, he was one of the most frequently programmed Dutch musicians during the seventies. Because of the immense amount of gigs Rob Franken was offered, performances were frequently cancelled at short notice. For this reason, Jan Huydts decided to quit after a while. This became irreversible by the sudden death of Rob Franken in 1983. Unfortunately, no record was ever released. Now this time has come. By listening to the CD you finally have the chance to get to know ‘The Keyboard Circle’. This rectification in the history of Dutch jazz music was a necessary one. And so: the circle is round.
Posted by Unknown at 8:20:00 PM