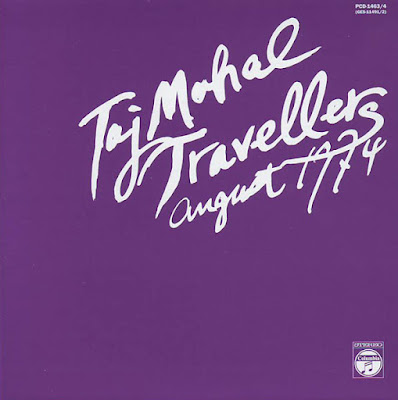 Recorded Live On August 19th, 1974 At The Nippon Columbia Studio No.1 In Tokyo, Japan.


This double CD reissues the legendary Tokyo improvisational group's Columbia LP from 1974. Like European experimental ensembles A.M.M. and M.E.V., Taj Mahal Travellers were dedicated to sonic experiments beyond categories of free jazz or avant-garde, and throughout the '60s and early '70s challenged musical norms the world over. Lead by Fluxus member and avant-garde composer Takehisa Kosugi, the ensemble featured instrumentalists Kyo Koike, Yukio Tsuchiya, Beiji Nagai, Tokio Hasegaw, Kinji Hayashi, and Hirokeszu Sato. The group adapted traditional instruments and electronics, yet saw no hierarchy in what could and couldn't be adapted into their battery of experimental instruments. Any number of devices were employed in making this massive and noisy drone piece. Recorded live in the studio, this music adapts methods from avant-garde, electro-acoustic, and ethnic music, and often takes the form of magnificent clouds of treated acoustic sound. The double-CD length is a compelling and thorough retrospective of the group, who recorded just two albums in the '70s. A vital and influential document of the Japanese avant-garde this was a hallowed artifact of the underground for many years. Made available in retrospect, it gives an insight into the early beginnings of an improvisational style which would be of incredible significance to the experimental music of later years.

Originally issued as a double LP with each of the 4 tracks being roughly the same length as the side of a record, August 1974 presents the Taj Mahal Travellers at their most sophisticated. Although their stunning cosmic music was always improvised, the band, formed in 1969 by "six meta-music creators and one electronic engineer" played regularly throughout Japan and eventually found their way to Europe where they met up with avant-garde musicians such as Don Cherry. 1974 would be the band's last official release as they went their separate ways the following year with all but Takehisa Kosugi, leaving music behind them. Each track is distinct from the others, with several beginning with clearly-defined structure before departing into the realms of the abstract, with violin, harmonica, bass, tuba, trumpet and mandolin dueting in a subliminal and obscure manner. "Voices" both subhuman and supernatural, resonate with a universal inner voice.

The Japanese answer to Tangerine Dream's "Zeit". As the most famous German album, it's made of four tracks, one per side of about 20 minutes. The difference is that Taj-Mahal Travellers didn't spend their time in finding exciting title tracks. They are just "Side A" to "Side D".

Very spacey sounds, minimalistic but not dissonant as many psychedelia. So if psychedelia and space rock are two different things, they belong mainly to the second.

Listening to Side A you can imagine astronauts exploring a cave on an outer planet, or an abandoned starship encountered in the deep space. It's a music that could fit very well as soundtrack of a SciFi Thriller movie. Better than "Birth of Liquid Plejades". Something similar to a sitar, God knows what instrument it is, reminds us of the band's name. Also the percussions in the second part of the track add some indo flavours. Close to the end, some elephants or other wild animals scream in the jungle. We have suddenly been transported from Space to Earth, or at least on a planet full of wildlife.

Side B is spacey again. The "elephants" are still present, but the keyboards countinue their travel in the deep space. A string instrument, probably a mandolin takes the role of giving the rhythm if it can be called rhythm. It's a very unusual way to use a mandolin. The other sounds are mainly electronic plus something similar to a didgeridoo (electronic of course). Again, they remind me to Zeit.

Side C opens very low-volume, with percussions still in indian style but with "violins" and bells, too. there are positive sensations. It's like waking up before the day becomes too warm. The Asian flavour permeates the music. Closing my eyes I can see the Indo river flowing...well I didn't take anything, I just like creating mental images when the music is evocative. The bells have also a bit of "Barong" so instead of the Indo it could be a temple in the island of Bali. Then we move north to Tibet. It's like viewing postcards of the Far East. Sometimes it becomes a bit more chaotic, but still very evocative.

Side D starts with didgeridoo and voices, that means electronic sounds, with some percussive noises which lie low in the background. Edgar Froese's "Aqua" is a good reference. This is the base to which sometimes a keyboard adds and removes sounds. We are looking for small variations on a repetitive base. Going to the end, the repetitive base is replaced by percussions and a wind instrument. Here it comes back from space again and fits into psychedelia, but just for a while. The final part of this suite is very Floydian and reminds me to the minimalistic parts of Intertellar Overdrive, Saucerful of Secrets, or also some parts of "More".
Posted by Unknown at 6:21:00 PM