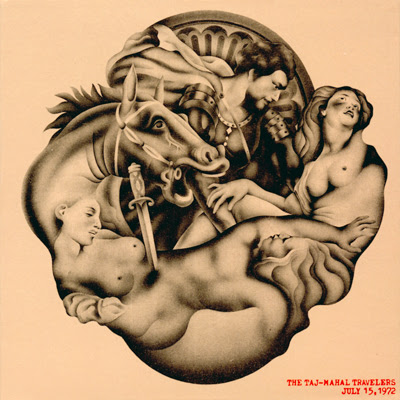 Originally released on LP by CBS/Sony Inc. [Japan] as catalog number SOLM 1. This is an official reissue sanctioned by Takehisa Kosugi.

Formed by the contemporary "fluxus" artist Takehisa Kosugi, the musical project Taj-Mahal Travellers started various musical improvisations at the end of the 60s. Their two studio albums, respectively published in 1972 and 1974 present a vast collection of sonic interferences, electro-drones and massive spacey/psych improvisations. A pioneering Japanese band with a rather ephemeral career. Since the 70s, Takehisa Kosugi has pursued his career in numerous electro-acoustic essays. His work is closed to 20th avant garde composers (David Tudor, Morton Subotnick...) with some reminiscences from Klaus Schulze and Conrad Schnitzler.

Takehisa Kosugi was a hippie who become an avant-garde composer. Born in Tokyo in 1938, he graduated in 1962 at the Tokyo University of Arts, and then founded the Japanese equivalent of the Fluxus movement, called Group Ongaku, a group devoted to improvisation and multi-media performances. In 1969 he formed the Taj Mahal Travellers, a psychedelic rock group that played lengthy improvised jams that can be summarized in three principles: a far Eastern approach to music as a living organism, an intense electronic processing of instruments and voices, and a semi-mathematical overlapping of frequencies. Basically: La Monte Young on acid. Kosugi mainly played violin. He was on the road with this group between 1971 and 1972, traveling in a Volkswagen minibus from Holland to the Taj Mahal itself. Two albums were made out of that experience: one of them this release

And together the 7 dwarves put their heads together and conjured up an idea on how to construct monumentally colossal and intricate architecture through sound. Working together like small bees, they managed to create an unparalleled string of albums by releasing musical pheromones in the air, seducing and enticing their fellow compatriots to take part in whatever honey-dripping invisible triangular cathedral of the day. And like all bees, the fruit of the labour - the meaning of it all - was to be(e) and fly and build and buzz along with the hive...

Throwing all reviewing manners out the window is probably the best way to go about writing about an album like this anyway...... Imagine a busy beehive trying to perform Tangerine Dream's Zeit inside a huge castle of reverberating iron. That's Taj Mahal Travellers for you! Or maybe a floating sand dune elliptically crashing into an electric signal....on repeat and in different octaves.

The 7 dwarves never go for the easy way out, or maybe they do because it's the only way they can work together? I honestly don't know, but it sure is a thrilling thing to witness. The music is free - completely improvised, as all their other records are. Slow drones that edge their way forth like a bare bellied Sleepy squishing on his stomach through jello and fine sand. Unreal wind instruments like wailing trumpets that sound so frail and longing, you could swear you were listening to a mother elephant mourning the passing of Dumbo and his little mouse friend. A bass tuba that raaaaaws on like a deep pulsating wall of blackness - foxtrotting through the night with the ominous and, at the same time, gentle electronics that have a way of sneaking up on you like shadows from a moving car - the city ninjas.

Over and under this fabulous structure, you get the violin sorcery. Yet another thing that moves in mysterious ways as the good Bono says, only here it moves entirely differently than what you'd expect such a nostalgic and classic instrument to do. It slithers, writhes, drones - creates elliptic circles of sound that never really sound like a violin. It's everything but actually, and come to think of it, the violin itself is probably the best advocate for all the dwarves playing. It deceives you....tricks you into thinking that it's something else. A wonderful kind of betrayal that flusters your senses and makes belief out of everything around it. All of this music is a sweet deceptive veil dropped softly and poignantly on your ears.

Take this out among the stars and watch the universe zoom in on you. Watch them dwarves build pyramid upon pyramid....drifting and floating on the cool winter night. They sparkle and shimmer in the moonlight and make you feel as if you're witnessing things you can't and at some future time will have immense difficulty in explaining to folks who don't believe in the magic power of music that builds structures out of air and can grab you by the throat and heart and soul all at once.