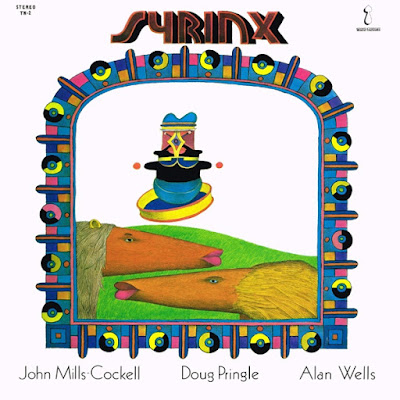 The history of SYRINX began in Toronto in the late 60's with musician John MILLS-COCKELL; his first musical endeveaours started out in avantgarde electronic group called INTERSYSTEMS with which he recorded three albums by the year 1970. Later on he moved to Vancouver and joined HYDRO-ELECTRIC STREETCAR, which is when he met with percussionist Alan WELLS. With producer Felix PAPPALARDI on their side they began recording tracks for the new album and recruited Doug PRINGLE as a saxophone player when they moved back to Toronto.

The first album was released in the 1970 which blended electronic, pop and world music where MILLS-COCKELL was able to express his talent for both orchestral and electroacoustic music. Group gained much exposure from live performances where they were among the first Canadian musicians to use Moog synthesizers, some of their most intensive tours being in the early 70's with Miles DAVIS on 'Bitches Brew' tour. Other efforts of the group included writing music for theaters and one memorable single has come out of a television theme song called 'Tilicum' for the series 'Here Come The Seventies'. The second album encountered problems when an accidental fire destroyed their studio, but a benefit show helped them out in getting on their foot again. 'Long Lost Relatives' was released in 1971 and was more theatrical then their debut, with several songs on the album making up a greater composition called 'Stringspace'; while 'Tilicum' entered Canada's RPM charts in the top 100, and peaked at #38.

Afterwards they toured with addition of Malcolm TOMLINSON on drums and vocals, and they had shared the stage with big acts like DEEP PURPLE for example. The group disbanded in 1973 after members got involved with their separate projects; John MILLS-COCKELL continued making electronic music as a solo artist and like PRINGLE worked with film music. PRINGLE eventually became a successful producer for all kinds of media projects and is still making music, WELLS unfortunately passed away in 2010.

This first one, self-titled "Syrinx" 1970, started the whole thing on its right foot. It is unmistakable, the kind of music "artists" propose, opposed to the "artistic" kind. The love for art itself, demands an interior discipline, which has no accomodation, for banalities like God money's rat-race. It is unmistakable, when musicians just compose, perform, record and release, because that is the natural cycle in any art form. Money is only parasitic in this part of the process, what follows is your choice.

Anyway, the freedom of creation in this kind of efforts, would be impossible to achieve without a clear notion of your own art. John Mills-Cockell had a very clear picture of to where he was heading music wise. This first album offers as a whole, a very serious amount of possible paths, so well attained, that this one , as their next effort, are hard to pin down to a single prog sub-genre, but also, kind of have to think of more divisibles to this equation.

All in all, it is more electronic in comparisson to its younger brother. It explores single-handedly (with a soloing synth), creative "metamorphical" melodic textures, which seem to have been stripped away of any kind of useless "electronic" paraphernalia, so many artist were tempted to use in that great era of "new" electronic gadgets.

No, on the contrary, in the true spirit of an artist, he will never sacrifice composition for mere innovation. Therefore intelligent compositions of attractive melodic lines, that move alongside a subtle almost invisible train of distant and hypnotic percussions, which never stop being creative yet low-keyed. Doug Pringle's sinuos and enchanting sax appears and disappears with elegance throughout the whole project (thus the connection many make of Syrinx also to the modern prog/Jazz scene).

A flawless, low-keyed, no paraphernalia, straight to where it matters, even though nobody notices, progressive/electronic masterwork. Which crosses over to other prog sub-genres, once in a while, in perfect balance!
Posted by Unknown at 2:41:00 AM