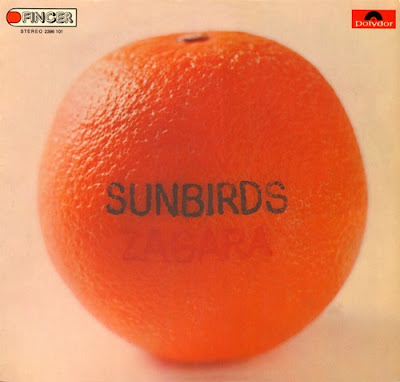 
Sunbirds were a band project formed in 1971 by German drummer Klaus Weiss. (17/02/1942-10/12/2008) Weiss had already twelve years of career as a jazz drummer behind him in 1971 and was appreciated by US jazz men touring in Europe. He had played among others with Bud Powell, Johnny Griffin, Kenny Drew and Don Byas. From 1962 to 1965 he had worked with Klaus Doldinger and in 1966 Weiss won the International Jazz Competition in Vienna.
In 1971 he formed the multinational Klaus Weiss Quartet featuring American bassist Jimmy Woode, Dutch saxophonist Ferdinand Povel and Austrian pianist Fritz Pauer, The same musicians joined by Philip Catherine on guitar and Juan Romero on percussion recorded in august of 1971 the first self titled Sunbirds record. The record presented an interesting form of early jazz rock with an extensive use of electronic keyboards. One year later in august of 1972 the Sunbirds released their second record, Zagara, again the Klaus Weiss Quartet joined this time by Ron Carter on double bass, Leczek Zadlo on flute, Lucas Costa and Rafael Weber on guitar and Norman Tolbert on percussion. This record presented an orientation towards Latin Fusion.