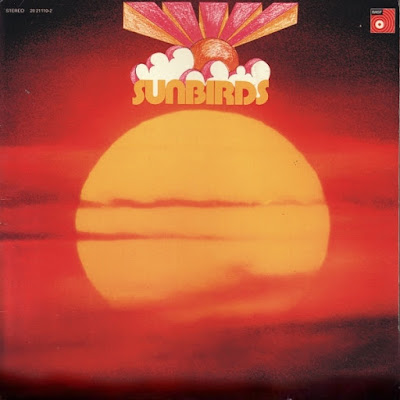 The fusion group Sunbirds was founded by the jazz musicians Klaus Weiss (drums) and Fritz Pauer (keyboards) in Munich in 1971, when the two of them had already made a name for themselves. They got Ferdinand Povel on flute, Jimmy Woode on bass and the world-famous guitarist Philip Catherine to join them. The band name Sunbirds was Fritz Pauer's idea, as well as the songs in E major and E minor, carrying titles including the word "sun". E is the sound representing the sun in esotericism. Due to their good connections, they could soon sign a contract with the then newly-founded BASF label. The LP was released in that same year of 1971, simply under the name of "Sunbirds" (BASF 2021110-2). The two as yet unreleased bonus tracks are from the same master tapes as the LP/CD tracks and were recorded at the same time. The second Sunbirds LP, "Zagara" is to follow on CD at a later point

Man this has been treat to listen to of late. I never heard of these guys before but they came highly recommended from Greg Walker so I took the chance, and i'm SO glad it did. Based out of Germany in the early seventies this Jazz / Rock / Fusion band released two albums,this being the debut. Love the album cover as well. While these guys were based out of Munich, Germany it should be noted that this was a multi-national band with a Dutch flautist, American bassist and the guitarist from Belgium. It should also be noted that these guys were all seasoned players, all having played in important bands or projects before this. Most were close to 30 years of age when this album was recorded while the American bassist Jimmy Woode was over 40 years of age. Jimmy by the way played piano and trombone before switching to bass and played in Duke Ellington's big band from 1955- 1959. He also played with Miles Davis, Louis Armstrong, Ella Fitzgerald, Dizzy Gillespi and Charlie Parker amongst others. In the book "The Crack In The Cosmic Egg" they had this to say about the SUNBIRDS : "On their debut "Sunbirds" they made a dreamy, yet powerful fusion with an abundance of solos, extensively featuring Belgian guitarist Philip Catherine, and smooth jazz keys from Fritz Pauer, feeling like a spacey EMBRYO cum Miles Davis. It's one of the great timeless fusion albums of the era that really gets the balance right, even when some of the tunes are so catchy that they linger in the mind long after".
"Kwaeli" has a relaxed beat with bass and flute helping out. Electric piano comes in as the tempo keeps picking up and slowing down. So good ! "Sunrise" sounds amzing as the flute plays over top. Crisp drumming as the organ comes and goes. "Spanish Sun" is mellow with flute and bass. It starts to pick up before 2 minutes as a beat comes in then guitar. Great sound ! The guitar stands out before 3 1/2 minutes then the electric piano comes to the fore. It's building.It settles back before 10 minutes to end it.

"Sunshine" is uptempo as the flute plays over top. Nice bass too. The organ replaces the flute and rips it up. The flute is back before 3 minutes. The guitar leads for a while then the flute is back to end it. "Sunbrids" has some atmosphere to start. A relaxing soundscape takes over around 2 minutes. The guitar leads after 3 1/2 minutes then it's the electric piano's turn. Drums dominate after 8 1/2 minutes. "Blues For DS" is groovy baby ! The flute plays over top as the bass,drums and guitar lead the way. Distorted keys before 2 minutes then the flute returns followed by electric piano.

You'll notice the word "sun" in three of the five song titles as well as in the band's name. Well it's because most of the songs they were creating were in E-minor or E-major and E is the so-called sun note in esotericism. Man I like this album, especially the electric piano. Amazing stuff !
Posted by Unknown at 8:10:00 PM