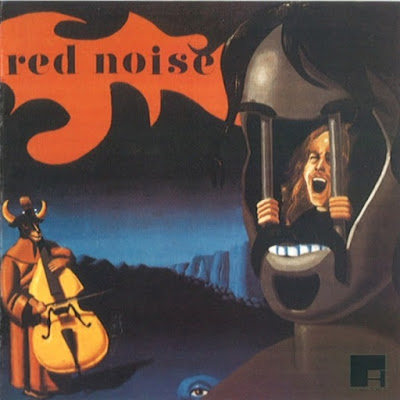 RED NOISE were formed as a French anarchic outfit in late 1960s by Patrick VIAN (guitar), a son of a French poet / writer / jazz musician Boris Vian. It's said they've played on stage defended in barricades in Université Sorbonne. They released one and only album "Sarcelles Lochères" in 1970 and soon were disbanded in the same year. Their indomitable spirit for rock music could be taken over by another French project named KOMINTERN.
Anyway, Patrick Vian should be a tremendous talent methinks. Later he released a solo album as a synthesizer player (not a guitarist), and in his solo work, we can find another gem slightly different from This RED NOISE's interesting noises, named "Sarcelles-Locheres".

Back to the topic, as if not 40 years ago, we can hear flood of progressiveness deeply under cynical (and usually nasty) phrases. Sometimes they slip away upon a wee-wet sheet in a toilet under such a sensual saxophone solo, and sometimes are immersed in poo-poo song ... but I feel their appearance might be very serious, even in such a pleasant and relaxing mood upon the vinyl (especially upon the Side A). In the mysterious and funny atmosphere of RIO, there are lots of beautiful sound stones created by the "serious" players. (For me the saxophone sounds are very addictive.)

And finally, the last song "Sarcelles C'est L'avenir" is exactly a serious battle play among all "serious" players. Improvised spiritual sounds shot by keen soundlauchers could rage like a hurricane, but they should not be destructive but absolutely creative. Let me say that's an much united infernal cry, full of intensive psychedelic & Kraut-ish aggression. 18 minutes is very short in RED NOISE theatre.
Posted by Unknown at 8:50:00 PM