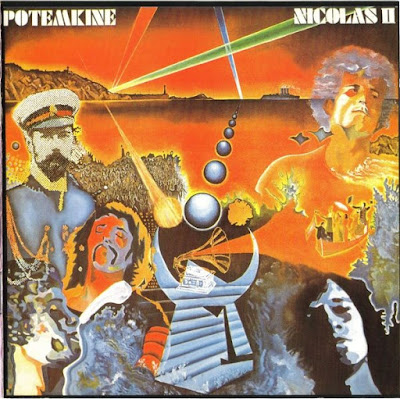 
Potemkine's third and final album is their strongest, and is something of an overlooked classic of late 70s prog. Following Triton the band became a quartet again with Michel Goubin back on keyboards, and there had also been a period of intense gigging including opening for Magma on several occasions. All this made for a much tighter and more confident band than previously, both in terms of writing and playing.
The sound of Nicholas II takes the Zeuhl of Magma's Attahk and adds the jazz fusion of Mahavishnu Orchestra, Brand X and Billy Cobham circa Spectrum. The arrangements are dominated by the interplay of electric piano and guitar, with Charles Goubin turning in some excellent lead guitar work - he may not have been in quite the same league as John Mclaughlin or Alan Holdsworth, but he was no slouch either. Dominique Dubuisson and Philippe Goubin keep things as tight as ever on bass and drums, with Dubuisson's bass occasionally recalling Bernard Paganotti's fluid basslines for Magma. On this occasion there's a funky undercurrent to a lot of the rhythm playing, and on Theme Pour Une Swing Imaginaire there's even a hint of reggae. Throughout the album the playing is tight, the compositions are focussed and the production is crystal clear, most of the pieces sounding as though they were performed live in the studio. The CD reissue includes all but two tracks from Potemkine's debut album Foetus, on which the quartet were augmented by violinist Xavier Vidal. The earlier music sounds a lot more tentative, with acoustic piano as the main keyboard and Charles Goubin's guitar playing more of a supporting role, but there are some good ideas lurking in there and there are definite hints of what was to come.

Apparently this incarnation of Potemkine opened for Shakti and were warmly congratulated by John Mclaughlin, and going on the evidence of this album he should have been both flattered and impressed. Recommended to fans of Attahk era Magma and of 1970s jazz fusion.