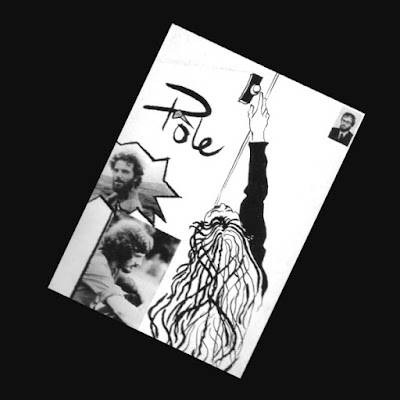 
'Kotrill', by Pôle is one strange, avant garde, heavy as a terminal illness, synth concrete LP.

A little backstory: Started in 1975 by the husband and wife team of Paul Putti and Evelyne Henri, Pôle Records put out some of the most challenging records of the 1970's; some just as good, if not better, than their 'Krautrock' contemporaries in Germany.

Early on, Pôle Records was also home to 'Pôle' the band (although it was more a collective than a band proper), consisting of label head Paul Putti, Thierry Aubrun, Daniel Bodon, Jean-Louis Rizet, Eric Dervieu, Christian Rouch, Marc Azad and Pierre Chavigny. Paul Putti is the only constant for both albums, though he doesn't play on all the tracks (for example, Daniel Bodon's only appearance is his solo composition 'Osiris' on 'Kotrill').

SO! On to the review:

The second track 'Osiris' (by Daniel Bodon) is like 'Kotrill' as a new born:  The synth screaming is still there, but higher pitched, the bass rumbling returns, but all of the ephemera, the voices, the drums, the effects, the corruption if you will, is gone leaving an... atonal innocence.

The third track, 'Villin-Gen', is a sidelong two note / chord drone with pulsating organ like tones orbited by jabbering square wave space junk and kept alive by a colossal heart beat.  Ultimately, it sounds like a barbiturate addled Terry Riley until about thirteen minutes in, when someone turns on an electric sink. A hymn to the god flow from said sink follows until it's drowned out by the returning space junk, ready to crash land in your ears.  All the while that heart keeps beating...

For those of you who enjoy CAN at their furthest reaches of outré meltdown, Conrad Schnitzler records from the period, or NYC's Excepter will certainly get pleasure from this.

The original LP is pretty rare, and remains to be reissued on CD. After this, Pôle the group made one more album (see review for ‘Inside the Dream’), though the label of the same name continued to release albums for a couple of years, some of which as mentioned above were presented in such a way as to make them appear to be also by the group Pôle – such as the Besombes-Rizet and Henri Roger albums. Julian Cope's Head Heritage
Included into highly acclaimed NWW list