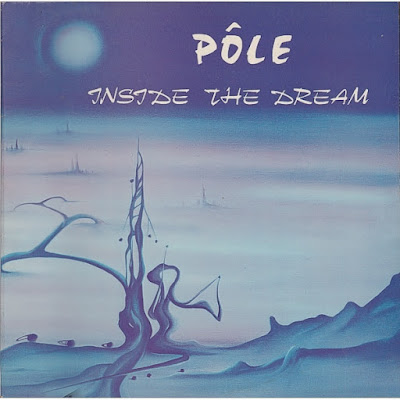 
Hazy outsider French Acoustics and Electronics released on the legendary Pôle label in the mid 70s. Properly dedicated to friends Heldon this record sits in a similar synth drone realm. But the first track is a beautifully soft acoustic affair that makes me think of the Charlambides.
“To start, "Inside The Dream” by Pôle the band / collective is a completely different beast from it’s predecessor, “Kotrill” (both 1975). Not just musically but, beyond synthesist and Pôle records major domo Paul Putti, the line up is entirely different. Where “Kotrill” started with it’s title track exploding out of the speakers in a synthoid götterdämmerung, “Inside The Dream” begins with an acoustic tranquility. A mellow folk riff (Michael Azad) rises into focus and is joined by a sopping wet electric guitar (Paul Putti) and near subliminal bass (Eric Dervieu). Then a smooth pleasant vocal (Christian Rouch) follows “Walking inside your dream now / So sweet, so cold / Watching your face in rainbows” . As so it goes, but somewhere along the line the electric guitar decides it’s sick of playing nice and forces it’s way into the front of the mix; if that means it’s completely out of key and pushing the needle into the red - so what? The following track, ‘Outside The Nightmare’ (solo composition by Jean-Louis Rizet) is more in keeping with ‘Kotrill’ in that it is based in the realm of synthesizers, but if ‘Kotrill’ was the soundtrack to the apocalypse, then ‘Outside The Nightmare’ is most certainly the soundtrack to the post-apocalypse. You may have lived through the worst, but you’re not out of the woods yet, kid. The third and final track, ‘In The Mäelstrom’, bleeds in from ‘Outside’, the sound of acceptance of the horrible turn the world has taken, and the will to face it, come what may. Slashing synths (courtesy Mssrs. Putti, Rizet, and Pierre Chavigny) march along with our hero, bloodied but unbroken. Along with “Kotrill”, “Inside The Dream” fee
Posted by Unknown at 1:59:00 AM