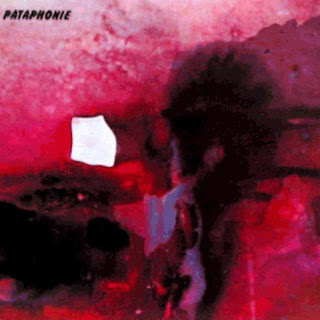 Before Pataphonie was unofficially "born" in 1973, the band members who were friends, played in several rock groups for the 3 previous years before that and mainly did covers. This trio consisted of Andre Viaud (guitars), Gilles Rousseau (drums and percussions) and Pierre Demouron (bass and contrabass). They then joined forces in a group without name that played a mixture of rock and jazz. Gradually they started opting for a more free-form rock. For a certain project they were joined by two other musicians; Bernard Audureau on piano and Alain Seve on saxophone. This group did this project which was inspired by contemporary compositors such as Bela Bartok, Eric Satie and Maurice Ravel and was reputed to have influenced Weather Report, Hugh Hopper and Henry Cow.
The band chose their name at random using a dictionary, going first for Mussel and then Patagonie. The sound of Patagonie attracted them and they opted for a fusion of two words - Pata from Pataphysique (unclassified) and Phonie which stands for sound, making them unclassifiable sounding. The band was to be an instrumental guitar, bass and drums trio. Their sound appeared to appeal to music critics in several journals that said in 1975 that Pataphonie "could be the great European discovery of the year". In 1976 the Pole records label collected their past recorded tracks from 1972 to 1976 and released them under "Pataphonie". However this mainly improvisational-based collection did not show the band member's abilities. The band members themselves said in 1977 that "To be free in music, you must work for yourself. Freedom isn't the notes recitation, but the feeling that you put into. You must work on the sound as a clay model. We think that we play an innovator music with his defaults. We can be wrong commercially, but musically, we're right. Music is not synonymous of success at all". It is only in 1978 that the band can allow itself financially to record in a studio. It is in July 1978 that they record their phenomenal album "Le Matin Blanc" (The White Morning). The album is instrumental, experimental, inspired by free-jazz and traces of contemporary classical composers. This release was embraced by their fans and media. Since no major label was interested in distributing this album the members decided to create their own with the purpose of distributing it themselves - Feeri Music. The album was sold by mail-order to about 1000 people. On the reissue of this album on CD there are bonus tracks. Among them is Mandoline Station which was written in April 1978 and never played live. However due to technical reasons it was not included on the original release. There are also 4 live tracks, including Memoire Baroque which is the title of the never release second album.This second album was completely composed however due to lack of interest and the shift of styles towards the "new music" the band split.
Pataphonie has been compared to Henry Cow, King Crimson, Etron Fou Leloublan and The Muffins, all have some sort of merit and still do no justice for this original sounding and groundbreaking chamber music/rock band.
Le Matin Blanc is highly recommended to fans of the genre.
Pataphonie's self titled debut on Pôle Records in 1975 is a jazz rock record of the 'free jazz' variety consisting of two sidelong tracks.  Starting with either the sounds of someone blowing a raspberry, spitting into a saxophone,slowly sliding their finger nails down guitar strings, or some combination of the three, Pataphonie slowly picks up intensity transforming from a good free jazz cafe act to a real freak out by tracks end.
Track two begins with some industrial strength guitar abuse, still very 'jazz', though - this isn't rock.  This gives way to a nice electric piano led passage before getting into some Sun Ra by way of Sonny Sharrock jamming, maybe approaching electric period Miles Davis (Jack Johnson, specifically), but still far more discordant.  Wah wah guitars battle with the gnarliest sounding organ of the era, no doubt, before burning out and freeing their ghosts to flit about over head; at war with jungle cats in full seizure.  Later, back in the lab, the professor madly calculates his theorem, the sounds of science mix with that of the wild beyond the walls.
The record ends the professor escaping the jungle in a vehicle made of pure dreams, freezing the dense madness as he goes.
Just as noisy as Pôle's Kotrill, but certainly more learned, which makes for a more ordered (predictable?)listen, but still a very enjoyable album.