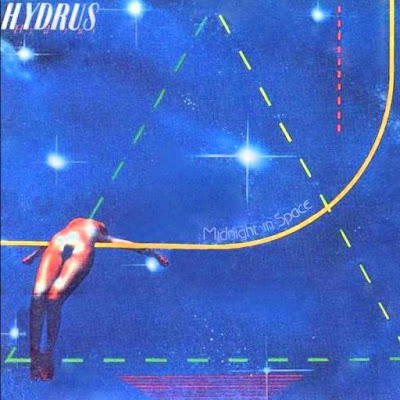 
This mystic electronic vinyl artifact from the late 1970's Italy conjures really beautiful nocturnal dreams from the aquatic cerulean of vast cosmos, which I personally felt containing a deeper meaning in its charming abstractions and thematic clues. This hour of midnight in space is introduced from fatalistic piano notes summoning electronic oscillating voices. A vortex of keyboards elevates from the synthesis, revealing wonderful emotional visions from the union of romantic piano and supporting electronics. Slowly progressing melodic theme reminded me slightly the Blade Runner's love theme from Vangelis, swimming gracefully on the ethereal tides of imagination. Bass guitar, cautious presence of drum cymbals and distant voices of lady singer are introduced among the electronic tapestries on the following sequence of hibernation. The composition structure is quite peculiar, as the flow of sounds ceases some points totally. First few minutes after the promises of the starting sequence, and continuing only after a long null void as more purist vintage synthesizer pulsing. The dreamy effects are achieved interestingly by reprising the opening themes via weirdly modulated variations, the note harmonies containing in my opinion some sort of call for awakening from the deep slumber. After another pause a very short progression with drums and guitar appear from the emptiness of unconsciousness. I felt the solution of hiding the conventional rock instrumentation band presence as rare hidden glimpses behind the electronic textures, also this short visitation is soon cleaned away by synthesizer sound projections, returning to the concept from the start of the song, allowing bass guitar and cozy keyboard lines be visited by the distant siren songs and barely present being drums and restrained touches of guitar.

Following scenery reveals our home planet orbiting among the vast gusts of solar winds, tiny technical notes being sent through radio waves to the infinity of cosmos. The signals grow as playful dancing on primitive note harmonics, and the vastness of space is presented as large formless sound presences. The fusion of these elements create a quite abstract tonal installation. Our home galaxy is then portrayed trough shimmering song with oriental melody on the synthesizers, uniting to groovy orchestrated brass-driven lounging, holding the archetypical qualities of 1970's western culture's music. This rhythmic theme emerges and disappears smoothly from the beautiful curves of larger and quite shapeless forms of electric tones. The distant small details and the grand sonic tones mingling together appeared for me as quite unique and fascinating aural innovations, allowing both solemn cosmic visions and also admiration for the musicians left unknown for me for these personal artistic achievements.

On the early Tangerine Dream reminding song for two planets I tried to pursuit further the potential allegorical meanings of the whole album. On the midnight hour at the aether of space, something sleeps in a deep dream, the slumber being molested with invitations for the awaken state, and this agent of signaling being Earth, Gaia, a Woman. The signal of this call voyages trough Milky Way, a celestial causeway noted in every culture's mythologies. The two planets, Woman and a Man woken from the sleep, search union through the call carried via the backbone of the night, cosmic winds leading to this synthesis on "Space Link-Up", concluding the album what I interpreted as the union of human love. This climax reprises the melodic themes from album's beginning with selective usage of amplified rock instruments, and also introducing the presence of male voice upon the electronic fusion sound realm. These planar states are altered on the scene, each waiting patiently their own proper time, and finally escaping to the emptiness of silence beyond the album.

It is possible these thoughts are only my own subjective fantasies, but one pleasant potential on abstract music is the possibility of being able to try to search your own interpretations from the artistic expression. It is also possible to just float on these melodically accessible and exceptionally beautiful sequences without requirements for meanings. This music is arranged to concepts with a manner which at least I have not encountered yet earlier, and caused deep satisfaction and admiration for the creators lost behind the event horizon of memory - a deterministic fate occurring for all of us, and a fact which does not need to be frightful if a solace has been found from existential contemplations of scientific, religious or philosophical nature. In my opinion the invitation for the album's cosmic mysteries are also presented wonderfully on the cover art; the geometrical trinity of logical codex set on the stellar landscape is being approached by the female character, flying gently over mathematical lines like a high jumper glides over the bar on athletic games, just as gently and arousing as the music of this divine album maneuvers upon the cosmic spheres.

This solitary album of Hydrus stands for me as a really precious and rare album full of cosmic sensuality, and also forming a codex for universe's cosmological meaning culminating in the love's union.
Posted by Unknown at 6:57:00 PM