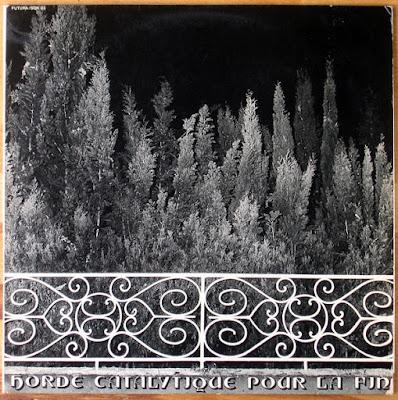 Released in 1971 on the legendary Futura label, this ultra-rare LP binds the idiocratic tendencies of Free-Jazz and Avant-garde into four intriguing tracks. Staying true to their improvisational ideals the album was record entirely without a predetermined score; with each group member focusing their spontaneous creativity to connect an effortless mind flow between the individual musicians. References for this band come from far and wide, with leafs being taken from likes of early improvisational-ist AMM and Limbus 3. The album weaves its way through dark and moody passages crowned with droning psych like characteristics, only to abruptly cut loose with Skronky onslaughts.

For an improvisational collection the album possess a rare flow from passage to passage; not to mention the wealth of textures and emotion flaunted. This being said, "Gestation Sonore" will test many casual listens into the point of despair. The albums true beauty works on a more subtle level, so don't abandon hope after the first spin.

This is grim stuff indeed. From the outset there's 'skronk' jazz saxophone with a splattering of other tuneless instruments randomly fired at the listener. Bangs, crashes, tinkles and what sounds like someone using a rubber hammer inside a grand piano will give you some idea of what you're about to endure for the next 39 minutes .
If any similarities could be made - it would be with 'AMM' who sounded more sure of their abilities and were heavier in execution. I guess it's also similar to early 'Nurse With Wound', but without the black humour, vocals and tape manipulation.

Recorded in one night at the 'Theatre de Nice' on 26th February 1971, 'Gestation Sonore' is a very difficult listen. Only the bleak soundscapes and creepy flutes hold my attention here. They remind me quite a lot of my earliest childhood TV memory - 'The Clangers'. However if you forced 100 people to listen to this (it would have to be at gun-point, by the way), I can guarantee you that no more than five would reach the end.

There are no hooks, no tunes with just a grey smog prevailing. It's also quite flat sounding in its production, without any feeling of depth.

The dissonant approach does grow on me after 10 minutes. It helps if you can switch off that musical part of your brain and just take it for what it is - a random, garbled collection of acoustic instruments played without any sense of timing or purpose.

Some of the percussion work is quite interesting, sounding like it's being played on children's toys - a bit like the 'Tom and Jerry' cartoons. To tell you the truth, towards the end I was actually starting to enjoy this. However, the sheer alienness of sound will deter even the hardiest of Prog listeners.

This surely has to be one of the most inaccessible recordings in the entire blog... but somehow I keep coming back to it
Posted by Unknown at 8:53:00 PM