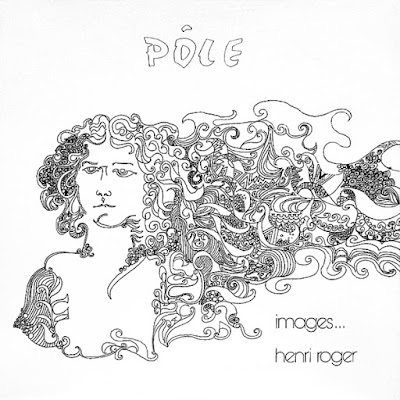 Henri Roger recorded just one album for the Pôle label, his first album ‘Images...’ which was confusingly released with ‘Pôle’ as the most prominent name on the front cover, so that it looks like it’s another album by Pôle, the group (see reviews for ‘Kotrill’ and ‘Inside the Dream’). Roger played everything on the album – Yamaha YC45D organ, Mini Korg Elka Rhapsody synth, and guitar. Not especially mindblowing as these things go, it is nonetheless a very enjoyable record and one that’s fairly unique and experimental, and tripped-out in a non-threatening way.
The meditative ‘Images...’ (21:45) takes up all of side 1, and features electric organ with loads of unusual treatments and effects. It sounds pretty unique, partly due to the organ mostly being played like a synthesiser and sequencer, and the odd hovering sound treatments that turn it all into a bit of a sedate, mysteriously sparkling cosmic analog mind carnival that’s a sheer delight. ‘Au Dela du Langage’ (8:53) opening side 2 is all synth, and sounds kinda somewhere between something at times dark but less tripped-out from the ‘Besombes-Rizet’ album (see separate review) and parts of the 2nd White Noise album (complete with chintzy sound). Half way through it fades out and after a moment of silence re-enters completely different, making it all actually two different tracks under the same name. ‘Ataraxie’ (6:30) is a mellow, melancholic guitar interlude that segues neatly in from the previous track and out again into the next. It’s all instrumental and pretty without being prissy. ‘Asyle Cosmique’ (10:34) used all of the above instrumentation in a richly textured cosmic stew, kind of ambient but mildly dark, creepy and experimental, like floating through the cobwebs of your mind, man, although guitar doesn’t come into it until near the end, and when it does things get more upbeat and change tack completely, sounding almost like an early precursor to Stereolab. Only the French (or maybe the Italians) could make albums like this little gem, and I love them for it.
Posted by Zen Archer at 4:44:00 AM