Friedrich Gulda & Klaus Weiss
1970
It's All One 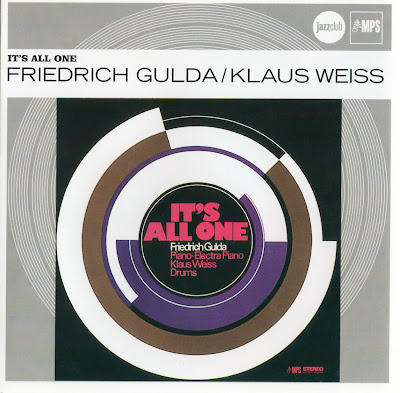 It is said that you can judge the quality of a man by the company he keeps and, on that basis alone, drummer Klaus Weiss can make valid claim to pre-eminence in his particular field of endeavour. Because Klaus Weiss has kept some pretty distinguished musical company in the course of a career which has spanned four decades.

In the post-war years, when American jazz musicians began touring Europe in increasing numbers and playing with local rhythm sections, they found their biggest problem was to find drummers who had a good sense of time and were both sensitive and supportive.

When Klaus Weiss began his professional career in 1958, good drummers in Europe were still very few and far between. Weiss, however, found favour with visiting jazz stars because, as Johnny Griffin observed, "he is one of the few European drummers with that distinctive American feeling."

Born in Gevelsberg, Westphalia, on February 17, 1942, Klaus Weiss taught himself to play drums and began his professional career at the age of 16 as a member of the Jazzopators, a group which accompanied American trumpeter Nelson Williams and also singer Inez Cavanaugh.

From 1962 to 1965 he worked with Klaus Doldinger and during this time he had a spell in Paris, where he worked in the famous Blue Note club with Bud Powell, Johnny Griffin and Kenny Drew.

In 1965 he formed a trio which backed American saxophonists Don Byas and Leo Wright and Jamaican Wilton Gaynair. That same year Weiss toured with a group that included Sal Nistico and Dusko Goykovic and also played some dates with Don Menza.

After a spell with the Erwin Lehn Big Band (1967 - 68), Klaus Weiss moved to Munich, joined the Bayerischer Rundfunk Jazz Ensemble led by Joe Haider and appeared many times at Munich's celebrated Domicile club. In the late sixties and early seventies, he became increasingly active as a studio musician. In 1971 he worked with a multi-national quartet which featured American bassist Jimmy Woode, Dutch saxophonist Ferdinand Povel and Austrian pianist Fritz Pauer, and in the autumn of that year toured with an all-star orchestra which included Slide Hampton, Don Menza, Herb Geller, Fritz Pauer, Philip Catherine and Chuck Findley.

This ensemble recorded an album, I Just Want To Celebrate, at the Domicile jazz club in Munich for the MPS label in November 1971 and, in his liner note, Friedrich Gulda wrote: "The formula is: Get a good dozen of the best musicians from both sides of the Atlantic, get some top arrangers to write the charts, rehearse (not too little, not too much), put the aggregation on the bandstand in a sympathetic club … and then set the whole affair afire with your drumming. Simple, uh? "Well, it isn't. Because such a venture requires of its leader more than purely musical capabilities: it involves nerve-wrecking preparations. Like phone calls to musicians who never seem to be at home or just moved to another apartment; bribing the customs officer into letting you have the arrangements before the job, not after…convincing the club owner that although soft lights may be good for business, they are bad for reading music…etc.,etc. "Very few people have the determination and the nerves to go through all this and much more….Klaus Weiss has."

Those observations say a lot about the other attributes of Klaus Weiss. He is an industrious and painstaking organizer who has always recognized that while spontaneity is a crucial element in jazz performance, also indispensable is the creation of an atmosphere in which the musicians can perform free of tension and stress, an atmopshere in which mutual inspiration and stimulus can flourish. And that takes, as Gulda noted, a lot of perseverance, determination and dedication.

In the first half of the 1970s, Klaus Weiss worked with the Horst Jankowski Sextet, the trio of former Mingus saxophonist Bobby Jones and the Eugen Cicero Trio. From 1975 to 1977 he toured with Mal Waldron and with the Dusko Goykovic Big Band and then, between 1978 and 1983, Weiss led a quintet which featured various guest soloists, including Sal Nistico, Roman Schwaller, Clifford Jordan and Andy Scherrer. He also played with Catalan pianist Tete Montoliu, with Eddie "Lockjaw Davis" and with the WDR and NDR big bands.

In the 1980s toured with Clifford Jordan and Horace Parlan, played with multi-instrumentalist Jerome Richardson and toured with his new quintet. In 1984 he recorded a big band album, "Lightnin' " which was nominated for the Süd West Funk Jazz Prize.

In a highly varied career, Klaus Weiss has made 17 albums under his own name, with formations ranging from trio, quartet, quintet and sextet to full orchestra, and has appeared on numerous other albums as a sideman.

Weiss's musical philosophy is that good jazz music - which means jazz played by consummate professionals who have a powerful rapport with one another and the same sense of musical direction - is a highly durable music. He says: "Count Basie's music will still be up to date 50 years from now."

Perhaps one of the most perceptive comments about Klaus Weiss's drumming comes from Belgium's Jean Warland, one-time bassist with the celebrated Clarke-Boland Big Band whose drummer was, of course, the legendary Kenny Clarke.

In the liner note to Weiss's 1988 album, A Taste Of Jazz, (which, for me, along with the 1991 L. .A. Calling, is one of the most impressive of a highly attractive collection), Warland said of Klaus: "Every time I have the possibility of playing with him, it feels as if we were simply continuing a conversation we had left off a few weeks or months ago…As a bassist, I always enjoy working with him… because his drumming relieves you of all worries and cares - the rhythm is simply there. There are no unnecessary fills, only a well-balanced drum and cymbal sound which expresses Klaus Weiss's admiration of Kenny Clarke. In other words, Klaus Weiss is a drummer in the great jazz tradition."

And, reviewing L. A. Calling in the American magazine Cadence, Dave McElfresh wrote that Klaus Weiss "exhibits a power and personality more exuberant than most of his peers on the instrument."

It is significant that Klaus himself defines his approach to drumming as directly derived from some of the great American drummers which he began listening to in the early 1950s. Says Klaus: "For me, the essence of great jazz drumming was epitomized by those giants, like Big Sid Catlett, Klook, Blakey, Buddy and Philly Joe. These have all been listening drummers, each with his own personality, but having in common a great ability to swing, to generate excitement, and to stimulate the soloists. And besides their sound and way of playing, I got really interested in the American drum rudiments because, as I discovered at the time, all great American drummers know and use those essential rudiments - but few of the European drummers in the fifties seemed to have assimilated these elements - at least, to my ears."

There speaks Klaus Weiss, a most accomplished musician who happens to be a drummer - and who is still one of the most swinging and sympathetic drummers in Europe.


A very complete album composed bu Gulda in the late 70's, musically complete in all terms, in composition, arrangements and interpretation, a must have for all the fans of Friedrich Gulda, a funny and emotionally album that you can hear from beginning to end everytime without boring, a very fine recording quality very well balanced with great soundstage, do yourself a favor dont miss this piece of art.