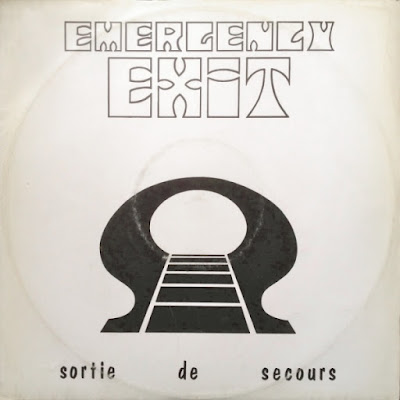 One-shot 70's French Jazz Rock act, led by French/Basque Robert Latxague (guitar, vocals), who was the main composer of Emergency Exit.He was accompanied by Pierre Maggioni on bass/acoustic guitar,  Michel Lacrouts on electric piano/percussion,  Roger Levy on drums, while producer/atrwork maker J. Devaux appeared to be the fifth member of the group.For their only album ''Sortie de secours'' (the French translation of Emergency Exit), released in 1976 on Pole Records, they were helped by Pierre Camy on flute and Miguel Angulo on keyboards.Angulo was also the main producer of the album, recorded in just two days at Studio KRS-DAX.
Three long tracks of abstract, guitar-fronted Jazz Rock was the only documents left by this underground band, highlighted by the 17-min. sidelong title-track, a mix of jamming Psychedelic Rock, technical Jazz Rock and lyrical Art Rock, where direction seems an unknown word, but at the end sounding pretty solid and charming.This is full of numerous jazzy guitar solos, breaks into slightly theatrical voices, funky rhythms and delicate flute-driven textures, while Lacrouts appears every now and then with his nervous electric piano.To my ears this piece seems to go nowhere, however specific moments contain shades of a great band with consistent, instrumental exercises and lots of inspired interplays among the rather chaotic psychedelic and jazzy influences.''L'autodafe'' continues in the same vein, maybe with more convincing power rhythms and bass lines in the forefront, still this is quite loose music with psychedelic jams standing opposite to the elegant flute solos and the jazzy electric piano.The come's and go's of Latxague on voices make this piece even more complicated.''Une ville'' contains some of the most dramatic passages of the album with Maggioni eventually torturing his bass next to Lacrouts' scratching electric piano.This actually sounds like the more solid piece of the album, balancing between inventive instrumentals, nice lyrical moments with a romantic flavor and some very complex ideas with piano, bass and guitars in evidence.
Unfortunately this was the only document left by Emergency Exit.Latxague later became a journalist, having already studied history and journalism at the University of Bordeaux, and collaborated as an author with the Jazz Magazine.
A questionable album in terms of consistency.Very loose and even chaotic, but some of its parts are absolutely efficient with great instrumental activity.Recommended.
Posted by Zen Archer at 2:42:00 AM