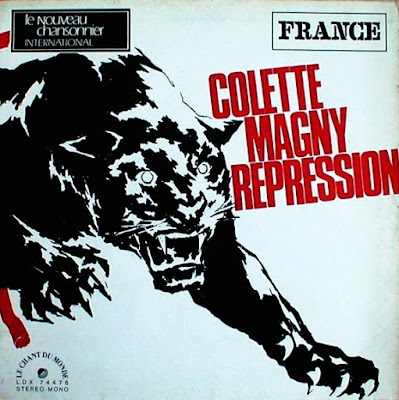 
Born 31 October 1926, Paris, France, d. 12 June 1997, Villefranche-de-Rouerge, France. Magny was one of the most striking and politicized of French singer-songwriters to emerge in the 60s. The daughter of a grocery salesman and an actress (though her mother only took up this profession at the age of 57), Magny started work as a bilingual secretary and translator at the Organisation for Economic Co-operation and Development in 1948, remaining in full-time employment there until 1962. Her interest in English-speaking culture introduced her to the work of blues and jazz singers, including Bessie Smith and Ella Fitzgerald. Having been instructed on guitar and banjo by the French jazz musician Claude Luter, she began to compose her own blues material, performing in and around the French capital. She played regularly at the Contrescarpe cabaret club, where she was spotted by enigmatic promoter Mireille, who booked Magny for her television show, Le Petit Conservatoire De La Chanson, and Magny’s version of “Saint James Infirmary” attracted rave reviews. The next day’s edition of the Paris-Presse newspaper proclaimed: “France has found her own Ella Fitzgerald”. Having left the civil service, she signed a contract with CBS Records and released her debut single, “Melocoton”, which reached the charts. However, she did not dabble with the mainstream French pop charts for long. Subsequent material included quotations from the Bible, Chekhov, Dostoevsky and Lenin set to music, translations of Lewis Carroll and Pablo Neruda and musical readings of French poets Victor Hugo and Rimbaud. She also continued to compose her own material, particularly after becoming politicized by the Algerian conflict of the 50s. Her song, “Le Mal De Vivre”, was banned by state broadcasters. A subsequent album, R?pression, reflected angrily on such censorship. She took an active role in the Paris student riots, helping to organize sit-ins and benefit concerts. In the 70s, Magny continued to branch out into new musical territory, working in jazz, rock and contemporary pop formats. Her 1973 album, Feu Et Rythme, won the Grand Prix du Disque from the Acad?mie Charles Cros. In the 80s she moved to the south of France, but thereafter her career was hampered by a chronic spinal disease. Despite this, she remained a huge influence on French political and musical culture, her curmudgeonly persona emphasized by one of her final outbursts, condemning ‘the bastards who pretend I’m already dead. I want to prove to them that I’m still alive, still creating.'”
Posted by Unknown at 8:39:00 PM