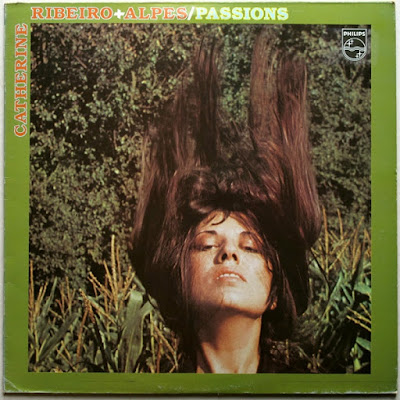 Compared with 77's Temps De L'autre, CR&A underwent a lot of pzersonnel changes, where only Moullet and Ribeiro remain, but with a returning Lemoine (whi will make his presence felyt as he's quite involved in the songwriting), making ex-Gong members (Shamal-era) two in this Alpes line-up along with percussionist Mireille Bauer. In the meantime, since their previous album, Catherine had recorded one or two solo albums, the first being homage to French poet Jacque Prevert, and another to anarchist singer Ferré. With a nature & wind snapshot of Catherine gracing blandly Passions, I always wondered why the much more impressive and militant and drawn (by Moullet himself) artwork on the inner sleeve didn't make it on the outer one, but most likely this was a record company decision
Passions is a bit of a departure musically, boosting shorter songs with the exception of two "monster tracks" with a much changed sound and even Ribeiro's vocals being recorded differently. This is immediately noticeable with the opening Iona Melodies where Lemoine writes the music and Catherine sings about her daughter changing her life, David Rose's violin being much too present and when not, guest Kennyatta's sax being obtrusive. Frères Humains is a return to previous Alpes albums and a highlight here. If it wasn't for Rose's (bad and sounding like a cheap fiddle) violin, you could easily imagine the following Cristalpin being on a Gong album of the later 70's, percussionist Mireille Bauer's presence clinching it. Starting out on an instrumental prog intro, Tous les Droits Sont Dans La Nature is another one of one those huge cries from Catherine about her utopias and generous ideals over an often changing "background" (only because it could've been recorded a tad louder in the mix) music.

The flipside holds the 11-mins+ L'Oiseau Devant La Porte, which starts in a lengthy prog instrumental intro, before Ribeiro tells us of the fresh young enthusiastic bird hitting the realities of our closed society's realities. While a good prog number, the track only convinces partly, because Ribeiro's lyrics are a bit off the mark and they dictate too much the music. Following the guitar instrumental Alpinette, Femme-Témoin is homage to Jane Fonda's anti-Vietnam stance and, while it comes over a decade after the facts, is impressive with percussionist Bauer renders the war realities particularly well. The closing Détournement De Chants (high-jacking of songs) is obviously from the same session as the opening track, this time with Kenyatta's sax and Campello's clarinet giving a strange glue-sniffing Supertramp- like feel over Lemoine's piano, but Catherine is taking wild shots at censorship.

While a bit different and not as representative of Alpes as others, Passions is still much worth owning, if you're into Alpes and want to own all the good albums. But personally I found David Rose's violin/fiddle all too often out of tune and not always inspired and it ruins a bit the album for me.
Posted by Unknown at 2:26:00 AM