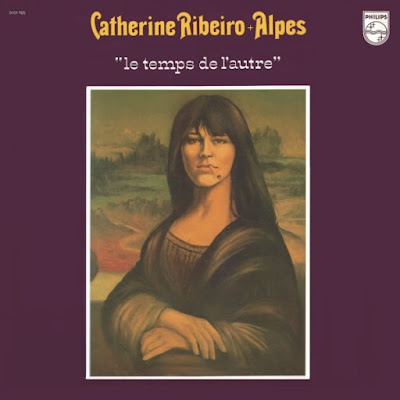 With Catherine posing as Mona Lisa with a spliff in her mouth on the front cover, you can just about taste the provocation of CR&A. Recorded in 77, this type of hippy counter-culture was losing its "in vogue" status as France was one of the precursor of the Punk boom of 77 in London, but in France Punk had started the previous summer in Mont-De-Marsan with the first Punk festival ever. Nevertheless, Ribeiro's lyrics had a certain punk attitude that allowed the group to survive these punk years rather smoothly.

Entirely penned by Moullet for the music and Ribeiro for the text singing, bar the closing instrumental), this album is again well in the line of its predecessors. The opening 7-mins+ title track starts on a slow Motron-played Hammond organ before the bass kicks in, draguing the rest of the group in before stopping dead again with Ribeiro continuing her singing over a bass drone interrupted by majestic solemn keyboards lines, returning to a drone (this time organ-driven) and so on. Yes, Alpes are still alive and well in 77. The only weird thing is the guitar taking a weird violin sound, not always fit, IMHO for this type of track. The following Cette Voix (this voice) starts on quick acoustic guitar arpeggios doubled over a slow but clear synth line and is an ode to her own voice (the text was first published in a Witch magazine) where Catherine wonders what her heritage will be, wondering if her daughter (pictured on the inner gatefold) will this the words of such a delightfully slutty and smutty mother where thousands ships came to board, and who has a clitoris in her throat in favour of love... Riiiiight, Catherine!!!!.. Little wonder Phonogram wrote under the written text on the back sleeve of this gatefold release that the words written only engaged the artistes. Aimer Quoiqu'il Arrive is a little bland after such a strong text, and will resurface later on La Déboussole, but still holds its own on its beds of guitars and drones of all kinds.

The flipside only holds two tracks, the first being the 10-mins+ Silence De La Mort (silence of death), where you can guess that Catherine is not holding back under Spanish-sounding guitars and slow synth layers. The closing 9-mins+ instrumental (if you'll except the wordless choirs at the end) is the most interesting on for pure progheads, because of the constantly changing music is a pure delight to us all.

Yet another good/excellent CR&A album, one that I haven't seen reissued on CD yet, that will indeed figure quite well with the rest of their albums. Whether this album is more representative of their works than others is completely debatable, but you won't go wrong with this one anyway.