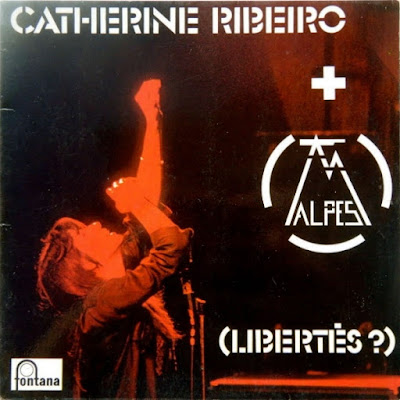 
Sixth album from this group that doesn't seem to wise-up, very fortunately for us. Indeed behind this rather bland artwork, CR&A are still going as strong usual with their psychedup progressive rock that is rather unique: even if there are moments to make you think of Third Ear Band, others of Floyd, there is no way to actually really pinpoint their sound other than raising CR&A as a reference in itself, this being reinforced by Ribeiro's very distinctive vocals and very personal lyrical style. Yes, the least that can be said is that her lyrics are often on the controversial, even anarchist, slant

After a very average Infinie Tendresse, not in terms of lyrics or vocal performance, but strict instrumental side of things, the short Prelude Medieval is actually the opposite, where the superb and stunning music would gain from being freed from Ribeiro's vocalizing practice runs. Homme Heureux is again more in the style of Infinie Tendresse, which just says average in terms of prog interest. The closing track of the A-side starts with a lengthy dialogue that holds interest only to those who wrote it and ends in a very solemn mournful vocalizing lasting 40 seconds.

The Poème Non Epique filling the whole second side is probably the best they've done including the other versions or parts present of Rats Débiles, their previous album. The track starts slowly and unlike its predecessors (previous album) is filled of breaks, counter breaks, rhythm changes and even holds some rather complex arrangements. This superb and extended intro only allows Ribeiro only appearing around the 9th minute, but what an entrance she makes: howling like only the beat poets could, she raves her fantasies about cops raping Cassius Clay and her anarchist/capitalist angsts over blood curdling cello drones and wild unpredictable percussions. The track veers towards total chaos in between the 21st and 23rd minutes, before ending abruptly in a fantastic manner.

Clearly if it wasn't for the sidelong Poème and the Medieval pieces, this album wouldn't stand up to the previous ones, but Libertés is yet another classic CR&A album that should be heard.
..
Posted by Unknown at 2:14:00 AM