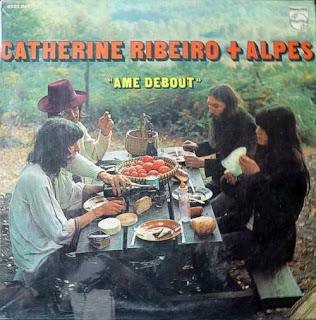 
Third outstanding album from the absolutely crazy French psych outfit lead by Catherine Ribeiro's impressive vocals, but you'll know by now that her vocals are hardly the sole attraction to this amazing group. With a very pastoral artwork, CR&A certainly stood in a class of their own both in France, but maybe even worldwide with their psyched out

Starting out on an Indian raga with a wild returning streak of almost dissonant violin, the title track is a first strong moments with Ribeiro ranting and raving all over the place, over a fast tabla drum beat. The very acoustic Diborowska (a terminus train station) is little more than a hippie piece, but laid over delicate guitar arpeggios. The two-part Alpes instrumental, followed by its acoustic outro Alpilles (small Alp foothills in Provence) is a superb moment of ambient music with some of the most bizarre violin work , while Lemoine's keyboard work resembles a lot what was to happen in Van Morrison's St Domininc's Preview one years later. The second movement is more of a wild free-for-all improvs, complete with vocals and vulture cries. Aria Populaire in an almost a capella piece with a few acoustic guitar strummings, while Kleenex is an organ-driven almost a capella, both pieces being superbly sung by Catherine. Dingue (nuts) is the closing track that hints towards a certain type of Flamenco, complete with plenty of guitars, where Catherine sings out venom-spitting sperm and full dramatics.

It's probably the gloomiest of their albums, but is beautiful at the same time. I'm so pleased she always sang in French. A lot of the emotion would have been lost if she'd sung in English. This is my one gripe with most Krautrock bands. This, however, is no Kraut album. Alpes are instantly identifiable even without the vocals. I've always thought there's something a bit creepy about their albums. I can't quite put my finger on it. Most folk agree that 'Paix' was the high watermark of their career. Well, I choose this one. It's cool, suave, bleak, laid back yet intense. Oh, and she looks great - black eyeliner, jet black hair and a fantastic jawbone! Catherine Ribeiro is like that fantasy warrior princess love that we all wish we could have, yet can't even get close to.
A tremendous album that probably creeps in to my top 40
Posted by Unknown at 1:57:00 AM