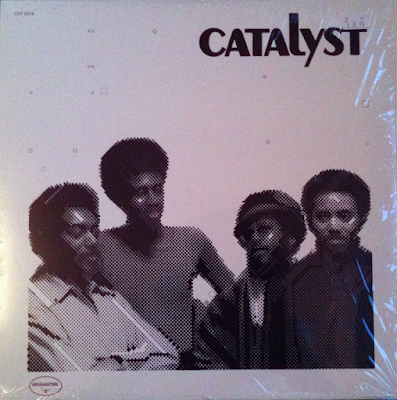 Catalyst was a funk/jazz quartet from Philadelphia, Pennsylvania, whose material presaged the work of later jazz fusion artists. The group encountered regional success in the 1970s and have become more widely known since the re-release of their material on CD. The group was discovered by producer Skip Drinkwater, who signed them to Muse Records after hearing them play at a club in West Philadelphia. Drinkwater and Dennis Wilen produced their debut self-titled LP, released in 1972 with the following personnel: Eddie Green (keyboards, vocals), Sherman Ferguson (percussion), Odean Pope (saxophone, flute, oboe), Al Johnson (bass). The group received little label support for major tours and so spent most of their playing time in the Philadelphia and New York areas. The group recorded and released a second album in 1972 on Cobblestone Records, entitled Perception; by this time, bassist Johnson had left the group to join Weather Report, and was replaced by Tyrone Brown. Drinkwater and Wilen also produced this album. Garnering comparisons to John Coltrane, Weather Report, and Return to Forever,a cult following had grown up around the band by this time, who returned in 1974 with Unity, again on Muse. The album featured Billy Hart in addition to its core members. 1975's After a Tear and a Smile would be the group's final release; poor album sales and disenchantment with the industry led the group to disband in 1976. Following their time with Catalyst, Green played with Pat Martino and MFSB, and both Pope and Brown began playing gigs with Max Roach; Pope also played with the Saxophone Choir. Ferguson later played with Pharaoh Sanders, Bud Shank, and Kenny Burrell. In the 1990s, the Muse catalog was acquired by Joel Dorn's 32 Jazz label, which released some of Catalyst's work on a 1998 compilation album. Fan interest led to their entire four-album discography being released as a 2-CD set, entitled The Funkiest Band You Never Heard. "Ain't it the Truth" and "Ile Ife" were covered by Uri Caine (keyboards), A.Thompson (Drums, from The Roots), and Christian McBride (bass), on their album "The Philadelphia Experiment".

Although Catalyst is generally remembered as a fairly stable quartet, it was not really the case with their debut album. They were mostly a trio at the time with Rhodesman Eddie Green, drummer Sherman Ferguson and wind player Odeon Pope, and whoever was around on bass, which included Alphonso Johnson, Anthony Jackson or Ron Baker. Musically, the band was a typical product of its time, including the African-awareness that saw each member take on a spiritual nickname. However the band never dared giving a more spiritual image as three or their four album’s artworks are absolutely boring, and the debut is indeed totally unremarkable, compared to their competition.

Opening on the light-hearted but short Ain’t It The Truth, the albums plunges in the thick of things with the 8-mins East, which delves in depth of the Vitous-era Weather Report, and the Mwandishi soundscapes, including Pope’s deep oboe that is reminiscent of Bennie Maupin’s bass transcendental foundations that made such impact on Mwandishi’s music. The 8-mins+ Catalyst Is Coming is somewhat more upbeat (and jazzier), with Pope saxing around and Jackson’s pedestrian contrabass (including a solo), but Green ever-present Rhodes keeps a fusion touch. Flipping the disc, you’ll return to the same kind of ambiance in Jabali (percussionist Billy Hart’s nickname). New-found Truths features loads of Rhodes, and the closing Salaam features loads of slow flute.

Although not nearly as well-known as Mahavishnu, Weather Report, Mwandishi or RTF (all direct descendants of Miles’ Bitches sessions) Catalyst’s debut album is just as good as their counterpart’s debut, but this band recorded their around two years after, which does not make them groundbreakers. Nevertheless, if you love early 70’s JR/F, you should have no problems appreciating this band’s four albums.