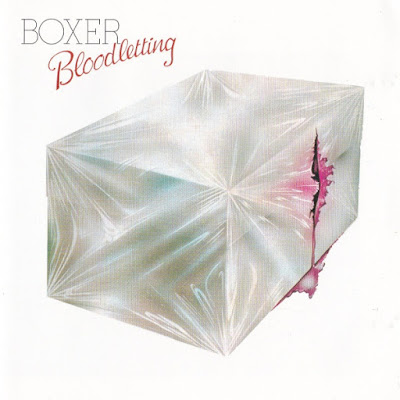 
"Bloodletting" was recorded in 1976, but for some reason was not released to the general public until 1979.  Strange, because it is a great album, despite the fact that half of the album's songs are cover versions and Ollie has no writing credits.  Every track is strong, and the band has a fuller sounding production than on the "Below The Belt" debut.

"Bloodletting" includes four great cover tunes.  "Hey Bulldog" rocks hard and includes some great guitar.  "Dinah-Low" is a fantastic version of the Terry Stamp/Jim Avery song from Terry's 1975 "Fatsticks" album, which both Ollie and Tony Newman played on.  Perhaps the star track on the album, though, is the live version of Leonard Cohen's "Teachers".  It is a smoking performance by the band, which features a bit of Ollie jamming alone towards the end.

Unlike the first album, other musicians guested on "Bloodletting".  Chris Stainton was acknowledged in large print on the album cover for his keyboards.  Boz Burrell (King Crimson, Alexis Korner, Bad Company et al.), Bobby Tench (Jeff Beck Group et al.), and Tim Hinkley (Bo Street Runners, Jody Grind, Alexis Korner et al.) all played in Chapman/Whitney's Streetwalkers and were involved in the Hinkley's Heroes jam band, which Mike Patto was also involved with.  The three are only listed in small print on the record label, so their contributions to "Bloodletting" are unclear -- likely just backing vocals and minor instrumentation.

Supposedly, a number of promotional copies were pressed in 1976.  Expect to pay a lot for one of these rare pressings -- if they actually exist and you can find one.  However, there seems to be a general misconception that this album was never released to the public, and some record dealers are asking as much as $100 for the 1979 stock copies.  That seems a bit inflated.  Near mint copies of the 1979 pressing can usually be obtained from a knowledgeable dealers for $20-$30.  Buyers beware!