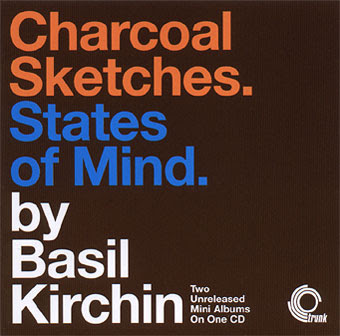 Side A: Charcoal Sketeches
This is the first time any of this music has been released or even heard. "Charcoal Sketches" represent the early building blocks of the prescient "Worlds Within Worlds" sessions.

Side B: States Of Mind
This was made by Basil for a medical conference - an international Conference of Psychiatrists and Psychologists, held at Earls Court in 1968.

This is more killer Kirchin music, from the late 60s, and unreleased until now. Basically it is all pastoral beauty, with jazz and birdsong. It was the musical "sketches" Basil put down before he developed it all into Quantum.

States Of Mind is the music to a film about medical disorders. Short and weird it features Evan Parker of sax, and is an early example of Parkers weird improvisiational skills. The sleevenotes have been done by a neuro thingy person, and they are hilarious.

So, here are some sleevenotes for you to enjoy. There are only 500 LPs, and limited CDs so get your skates on.

This is the first time any of this music has been released or even heard. "Charcoal Sketches" represent the early building blocks of the prescient "Worlds Within Worlds" sessions, and are literally the musical jottings made by Basil before he built up his ideas into the magnificent avant garde opus we all know and love. The music is far gentler than "Worlds" or "Quantum", and at the time Basil knew where he was headed musically, this was just really the first step into a new sonic world. The session dates from about 1970, just before the main Worlds sessions commenced. It's difficult to be more precise but the main thing is it's here now and very beautiful it is too.

This music was made by Basil for a Medical Conference - an international Conference of Psychiatrists and Psychologists, held at Earls Court in 1968. It was the soundtrack for a short film exploring the different kind of mental disorders humans can suffer. All records of both the fair and the film have been lost, so I decided to send the music to a brain specialist, to get her opinions of the music composed and some new titles for the pieces. As for the music, you may find pieces a little disturbing, but that's what Basil does best. I'm also a little sorry this almost historic recording is short, but this is better than nothing at all.

Track 1: Plaques and Tangles (3.53) These are the post-mortem hallmarks of Alzheimer's disease. The track represents a lack of recognition laced through with feathery hope, and the occasional threat of lucidity which is the signature tune of this degeneration.

Track 2: Spiked (1.25) An involuntary trip. This track sounds like acid, but I didn't take any.

Track 3: My Unintended (or Ballad of the Basal Ganglia) (0.44) The Basal Ganglia constitute a brain area responsible for action selection. In pathologies such as Parkinson's, this circuitry is no longer efficient, leading to loops of unwanted actions or the inability to initiate sequences. The brain "knows" what it wants to do but limbs don't listen. This piece contains circuitous cascades which smack of the Parkinsonian syndrome.

Track 4: Folie a Deux (1.11) Paranoia affecting two closely associated persons at the same time. In this composition there seems to be a reciprocal, desperate relationship between elements.

Track 5: Face Blind (1.20) Refers to the neuropsychological phenomenon of face-blindness or "prosopagnosia" acquired after specific brain damage. There seems to be a perpetual scanning for features to hold on to with this track. It reminded me of a patient who could only recognise his wife by her bunions.

Track 6: Head Steam (0.38) Another name for thoughts. This piece made me reflective in a grand way, such that a formula seemed appropriate. GREY TOOTHPASTE + ELECTRICITY = THOUGHTS AND WANTS AND MATHS AND THAT.

Track 7: Forced March (1.26) 1920's pills containing cocaine, supplied to explorers and the like for the sake of endurance. Withdrawn due to excess demand. I had a sense of the "long not high" of coke combined with the fidgets of mucho crack. I really felt the restless twang of the crack-dancer in this one.

Track 8: Mrs. Mantus (2.08) Mantus and Mania ruled the underworld and, for years hence, the latter lent her name to insanity. Now she's nicer and gets confused with happiness; nice springs of joy in this tune.

Track 9: Fugue (1.45) Point and counterpoint of internal and external voices. Also a state wherein a novel identity is gained without any recollection of a previous one. This tune fugued; went a-wandering and a-drifting over a featureless space.

Two never-before-released mini-albums from 1970 and '68, respectively. Charcoal Sketches is made up of studies for Kirchin's later works, and is three pieces of mood jazz with birdsong.  Quite lovely, but very weird, as the birdsong is very prevalent, and shows no obvious correlation to the music being played.  The strumming of guitar gives a gentle rock sound to the melancholy jazz, and in "Sketch 3", the playful bass and magical melody wouldn't be out of place in Stereolab's later repertoire.  The poor recording quality of Charcoal Sketches, in the context of being a long-lost artifact, manages to pass as texture.

But as swell as Charcoal Sketches is, it pales in comparison to the pieces that make up States of Mind.  Jarring, angular explorations of sound give way to suspenseful, downright scary passages.  It's where avant-garde classical and jazz join with all manner of strange sounds to create a horrific soundtrack.  It was composed for a film on mental disorders at psychiatrists' convention in 1968, and comes across like a demonized cabal of Béla Bartók, Bernard Herrmann, and Eric Dolphy dancing around in Alfred Hitchcock's head.  Cool stuff.