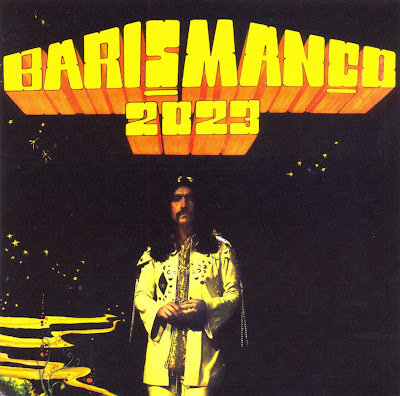 
At the start of the seventies Turkish composer and singer Baris Manço had a cult status amongst youngsters. The establishment thought him a bit of an oddity though, with his long hair, big moustache and colourful caftans. His first album ‘Dünden Bugüne’ was actually more a compilation of his beat-period but by 1974 he was ready for the next step. Released a year later ‘2023’ was his first non-compilation LP. The concept of the album was around a man living in the year 2023 and looking back at a hundred years of modern day Turkey. To understand the context of the album we have to take you back to what happened in Turkey in 1923. In that year the old and powerful Ottoman Empire (which was around since 1299) crumbled under the force of their alliance in WW1 and the military campaigns against offensives of Greece, and of the Turkish-Armenian conflict and Franco-Turkish War. The Turkish Nationalist Movement started their revolt in May 1919 which we now know as the War of Independence (Turkish: Kurtulus Savasi). The recent, and last sultan, Mehmed VI Vahdettin fled the country on November 17, 1922 after only four years of reign. Thus ending the sultanate and the Ottoman millet system. The new independent Grand National Assembly of Turkey (GNA) was internationally recognized with the Treaty of Lausanne on July 24, 1923. The GNA officially declared the Republic of Turkey on October 29, 1923. The Sultan and his family were declared personae non gratae of Turkey and exiled and Atatürk's reforms commenced creating Turkey as Manço experienced it in 1975.

The poem ‘Kayalarin Oglu’ (Son of the rocks) that starts the centrepiece on the A-side of the album is a reminisce of these historical events: “A warm October morning of famous 1923 / was born in the land where the rocks struck the vertical / I'm the son of the father of rock anayla soil / Mother earth loving, full of blessings / Anatolian mother earth mother earth”. It then continues in a ten-minute instrumental using many traditional instruments and melody cords. Backed by his new band Kurtalan Ekspres (named after the express train which travels between Kurtalan and Haydarpasa). Closing track on the A-side ‘Uzun Ince Bir Yoldayim’ (Long And Winding Road) hints to the long and difficult road Turkey had to take to reach the 20th century. “I'm going day and night on the long and winding road / where I'm going I do not know / what day and night”.

The 13 minute long centre piece on side B ‘Baykoca Destani’  explains more about the hazards Turkey found on it’s way. Without being to explicit Manço’s lyrics can be read as a report of the several violent military coups the country experienced. By 1974 they already had two military coups d'état (1960 and 1971) and the country launched a military campaign occupying part of Cyprus in 1974. “A star was born in the mountains above / 12 thousand girls were included in the ledger / As a party we took to the roads / Ha ha Shoot Shoot Shoot Shoot / Dügünmü think I'd stolen the drums? / Sweet flag, you think I'd come? / Ships lie in the Black Sea / The sky is the harvester in the Artillery Mountains” Little did he know that three more coups would follow. In Manço’s imagination Turkey would develop into a rural community perhaps based on ideas of the socialist movement he witnessed in Paris and Brussels when he studied there in the Sixties. On closing track ‘Kol Basti’ he envisions the socialist revolution has run its course: “Rivers run through the meadows / Active green leaves / you feed the black soil / Persian daughter's daughter / I wear the red / Genesis at the top of mountain water / You raise the daffodil / Come on raise your hand / We are not afraid of it now”. He could not have guessed that by 2010 the centre-right AK Parti would rule Turkey taking a turn to a more conservative political course. But we’re not in 2023 yet!