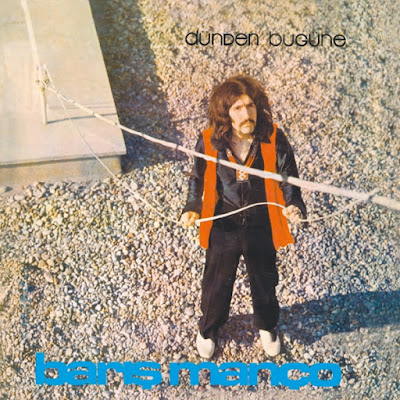 By the time Baris Manço had his first LP released, one must realise that he was already in the business since 1958 (at age 14/15) and had already made a lot of wonderful singles (with accompanying bands like Harmoniler (since 1962), for a while with the Belgian band Les Mistigris (since 1966) during his graphic studies in Belgium, with Kaygisizlar (since 1967), -a band who after its discontinuation had formed another psych-folk legend, Mazhar & Fuat-, and lastly, with a band that was simple called Ve (since 1969), like an attachment to Baris's own songs and ideas.
At the time Baris left the Ayan label, all the songs recorded between 1968 and 1971 were released in this LP-format, with the inclusion of one extra song and one alternate take. Despite the fact that the focus on the recordings had been on the singles, the record still hangs well together. Mainly these are the songs with his latest band, with an aproach that was trying to fill the gap between the public's interests for music, being mainly interested in folklore, and rock music, in a successful formula. The last band which Baris tried and worked with around this time was Mogollar (under the form of Mançomongol), but that happened already after the recordings of this album were done. Last year, someone already bootlegged a reissue of “Dünden Bugüne”, but Guerssen did it officially with a remastered edition taken from the original tapes.

It becomes immediately clear what the public must have liked about Baris approach. He first of all has a warm and soft voice ; the compromise between electric progression and recognisable Turkish folklore also gets a very attractive, groovy, powerful sound and vision, which makes a progressive, exotic new mixture, where it is not always clear in each track where all tunes and rhythms really originate from. The first three tracks start with a folklore tune on Turkish violin or flute, then they are adapted into a newer context and song drive (the first adds acoustic guitar and voice, the second track an electric band and powerful bass line, the third track starts with additional acoustic guitar first, then turns the track into an up tempo electric version, playing faster and faster. There you can hear interesting fuzz pedal sounds being used and also, attractively worked out percussion). “Kücük Bir Gece Müzigi” is an instrumental based upon various layers of percussion. It has a rather psychedelic sound of a wah-wah lead guitar, which used once more another nice fuzzed pedal sound. “Kol Dügmeleri” is a nice waltz song with Hammond organ, electric guitar and drums only. “Derule” has a very simple repetition of a fuzz guitar riff that is rooted in a Turkish rhythm and on which the complete song is based, grooving away. “Iste Hendek Iste Deve” has a straightforward beat, is an emotional song. It is softened with acoustic guitars and is at the same time empowered with keyboard solos, which sound a bit like fuzz solos. “Seher Vakti” is a bit more popular in sound, and is more up-tempo. “Anadolu” is another attractive oriental folk-rock instrumental led by electric guitar and electric rhythms. “Lory” is one of these 60s pop love songs with English lyrics, with an accompaniment by Hammond organ, electric guitars and drums. The lead vocals show emotionally sung vocal harmonies. The last song features a sad tune, and is accompanied by acoustic guitars, Turkish standing-violin and organ and is a powerful closer for this album.

The longest musical period that will come after this period featured the Kurtulan Express Band, whom you can hear in the next few albums. Baris quickly became a more popular figure with a TV show, bringing people from different approaches together (besides he had a few appearances in movies). The attention to his music faded during the 80s, but he always kept his long hair.