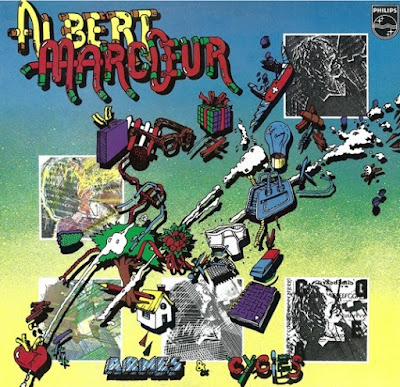 
If the team that had operated on Albert Marcoeur's first adventures had been drastically changed by his second album, he chose to keep roughly the same team (that still included his brothers Claude and Gerard) , but this time he changed the premises, opting for the famous Hérouville Studios and Laurent Thibault behind the console . Opting again for the same artiste for his sleeve artwork as he had for his first two, Armes & Cycles is in the direct continuation of his previous works but, here, he makes sure his musical adventures are more accessible to a wider public. As in the Colorier album, the tracks are kept rather short except for two longer (but mid-length) ones, including a n instrumental that reassures us that Albert is indeed capable of writing "normal music".
Indeed, right from the opening track Ici, and despite a difficult intro, once the track is ion, we get a good guitar-lead tune that opts for ultra nervous vocals, but on the whole the music is not too complex. Ditto with Emploi Du Temps including some normal solos, but the following Dame is not Albert's nicest idea, to say the least, despite a good instrumental ending and overall sound sonic foundation.(are you sure you're following me?) With the first instrumental Linge Sale (dirty laundry) serving a bit as an intro to Histoire d'Offrir and its piano line and the Kelzmer-influenced instrumental Ampoule Grillée doing as much for Reveil with almost Doo-wop vocals, A1C steers towards madness the no-return point at the turning of the disc.

There is an incredible moment halfway into Son Sac where the vocals go into canon-style delivery and the result is simply awesome (although you'd better understand French), and elsewhere the closing Bonjour Monsieur could've been written by Steve Hackett in his early solo effort (from Please to Defektor, but not on Mornings) and features two acoustic guitars, one with steel strings, the other with nylon strings. Interesting

A&C is an easier album to "get", mainly because the music is more evident (and accessorily more accessible) but don't get me wrong, this is not for every pair of ears, even for the ones frequenting our beloved site. Not as good as the debut album, but better than its sophomore effort , this is the third strike for Marcoeur, but he's scoring a run.