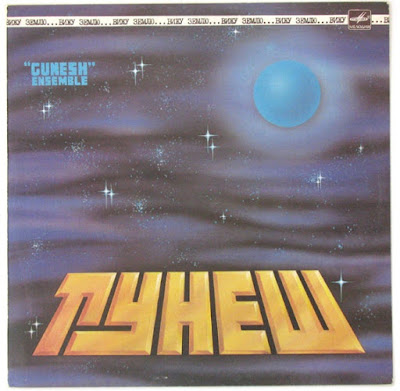 Gunesh Ensemble - Looking at the Earth

At first the ensemble was a part of State TV and Radio Company of the Turkmen Soviet Socialist Republic as a vocal group with supporting instruments. Later the composition of the group began to change as young people joined it. The group began to play jazz-rock tightly intertwined with the Oriental tradition. Gunesh' has always been in the process of reforming and was one of the first and best to organically combine the similar principles of the melodious improvisation on traditional mugams and jazz improvisation. The unexpectedly beautiful arrangements appeared,and polirhythmic compositions with odd measure were
further developed thematically.
For their second LP, Looking at the Earth, Gunesh stepped it up a notch on the creative scale. We still have 2 barn burner horn rockers but Gunesh also added some trippy Caucasus mountain music, Muslim prayer calls, psychedelia, hot fusion, Vietnamese traditional music, etc.. to make for one of the finest albums I've ever heard. Rishad Shafi is possibly the finest drummer to be found in the prog rock archives (Peter Gabriel considered him once but working it out with the Soviet authorities proved to be too much)
Going through the tons of albums I have from Turkmenistan (ha!), I think i've found a favorite! The GUNESH ENSEMBLE (sometimes found only as Гунеш (GUNESH) was a highly eclectic and energetic group led by drummer Rishard Shafi. They were masters of jazz-fusion mixed with all things Central Asian folk including haunting chants and exotic instruments. Of course they even had a Vietnamese singer! After their first album of mostly folk material they really stepped it up and created something truly unique and unbelievable.
Вижу Землю (Looking At Earth) in an unearthly amalgation of musical majesticness. The album begins with a whispering wind and some temple bells before Russian dialogue ushers in some seriously deranged funkiness and energetic percussion and horns with some strange electronic “talking.” The jazz-fusion doesn't waste any time getting warmed up. You know you're in for a very wild ride with this one. The album continues to surprise with abrupt changes but quite capable of sustaining a beautiful melody in the form of song or chant. The interplay of 10 plus instruments may be going on at any given moment. Absent are any influences from Western bands. All sounds original and isolated like it was all created in a remote area that still hasn't made contact with the Western world. However parts do remind me of Italian avant-proggers Area and the last cut sounds like a traditional Vietnamese song meets the Mahavishnu Orchestra.
If you like eclectic world fusion then you will love this. Must hear to believe.This album had only one vinyl release in 1981 and is probably impossible to find but fear not. Rishad Shafi released the first two albums on CD titled “Rishad Shafi Presents Gunesh.”