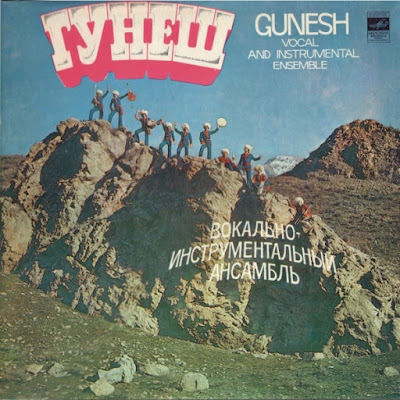 The GUNESH ENSEMBLE (Гунеш) actually formed all the way back in 1970 and went through various line-ups. In the beginning the ensemble was featured on the State TV And Radio Company Of The Turkmen Soviet Socialist Republic, now more familiar as Turkmenistan. While the band began as a vocal group with supporting instrumentation, it was the drummer Rishad Shafi who had the itch to pursue the jazz-fusion world and attracted other members who wished to do the same.

Throughout the 70s the band entered contests throughout the Soviet Union and won first prize in many of the competitions for their highly developed take on traditional mughams and jazz improvisations. A mugham is a very complex musical art that combines classical poetry and musical improv. It is a modal system, but unlike Western systems it is not only used with scales but rather is a collection of melodies that enrich the improvisation that is enhanced for a specific event. This can mean increased intensity, rising pitches or even fusing poetic interpretation into musical form. This is a very common art form in this part of the world.

After ten long years and countless performances the GUNESH ENSEMBLE finally released their debut album Гунеш (GUNESH) in 1980. Unlike the spectacular second release and mega-masterpiece “Вижу Землю (Looking At Earth)” which dosed everything jazz-world-fusion-rock in heavy steroids, this debut release finds the band on a less ambitious journey although it is by no means a sleeper. Whereas the second album finds any global influence fair game, this one is more focused on traditional Turkmen music with a healthy jazzy horn section mixed with some veritable progressive rock which is heard mainly in the drum section as well as with the guitar. This first release has a lot more tracks focusing on vocals and harmonies which are less frantic without the playful trumpets, trombones, flutes and keyboards that dominate the instrumentals.

While this debut album by the GUNESH ENSEMBLE isn’t nearly as brilliant as the second, it is a beautiful debut that takes you to a lonely corner of the globe where very little is known to the average Westerner and extremely well progressive music like this shouldn’t be missed. This album had only one vinyl release in 1980 and is probably impossible to find but fear not. Rishad Shafi released the first two albums on CD titled “Rishad Shafi Presents Gunesh.”


After two decent singles Gunesh would finally cap their own space for a full-length self-titled debut, always under the support of Melodyia.The legendary line-up appearing on the album was Stan Morozov on flute/sax, Rishad Safi on drums, Vladimir Belousov on bass, Mikhail Loguntsov on guitar and Shamamed Byashimov on keyboards.Yusif Aliev appears on trumpet, Alexander Stasukevich and Shamil Kurmanov on trombones and Ilyaz Redzepov, Khajiriza Ezizov on vocals, but I am not really aware if they were permanent members of the band. The album was released in 1980.

Some tracks of the previous singles of the band made it to the final cut of Gunesh'es debut and even them sound a lot better in the enviroment produced by the band over a full-disc performance, combining elements from Ethnic Music and Jazz Fusion in an impressive execution of technical accomplishment, composing talent and vocal passion. Shafi has to be one of the most underrated drummers of the genre, extremely fast and flawless, reminding a bit of  ARTI I MESTIERI'S Furio Chirico.The music is mainly instrumental with a few excellent vocal explosions of Eastern Asian-styled lyrics (which of course I do not understand), but you should focus on the music, which is surprisingly energetic, technically amazing and extremely balanced between Ethnic tunes and super-tight Fusion, or if you like between complex twists and more dramatic overtones with a folky flavour. Fantastic guitars parts and solid bass work with Jazz, funky and Eastern influences, complemented by a discreet keyboardist, performing on his sole organ, and a huge brass and wind section with lots of sax and very cinematic display of a small trombone/trumpet orchestra. For the most of its length the album is fast-paced without significant flaws, a good production and featuring endless interplays and solos with a slight sense of melody and a heavier amount of mourning vocal parts.

One of the well-hidden gems of 80's Jazz Fusion.Ethnic-oriented Fusion with melodramatic vocals and dense executions, definitely one of the most genuine and personal works of Fusion performed by an ex-Soviet group. No less than highly recommended, even if an original copy is pretty rare.